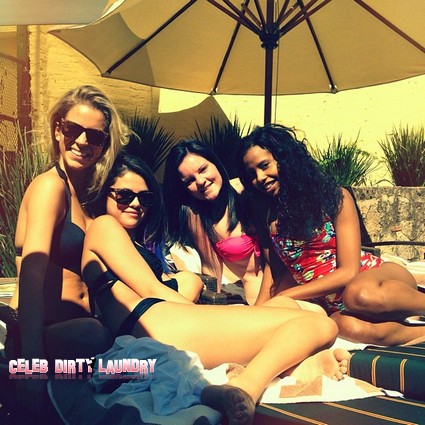 Selena Gomez has tweeted a hot pic of herself in a bikini while sunbathing with some gal pals – a pic that would make any boyfriend jealous – even Justin Bieber. At the very least, jealous that he is not there with her. Selena is enjoying some down time from her hectic performance schedule to vacation in Mexico and has released several pics on Twitter over the last couple of days. They are all in good fun but still show off Selena’s sexy appearance to good effect. Could an ulterior motive to Selena’s Twitter pictorial display be to make sure that Justin is paying attention?

While Selena was enjoying the Mexican sunshine Justin attended Saturday’s NRJ Music Awards in Cannes, France. Seal, LMFAO and Shakira also walked the red carpet but it was Justin who walked away with the night’s biggest honor, Artist of the Year. The award honored Justin’s achievements in France throughout his career. Justin charmed the crowd, graciously accepting the award and saying:  “Thank you to everyone here, I love you guys.”

Meanwhile, Selena tweeted the innocent message “Mexico has been amazing.. #girlsday ready to see @pmdeleon22 :)” along with pic below:

Nothing like seeing fresh pics of one’s bikini-clad GF on the Internet to keep a young man in line while he is thousands of miles away. We are sure that Justin and Selena are just so eager to spend some time together soon. They must be the world’s cutest couple!