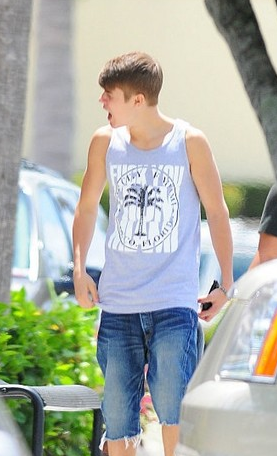 Attention seeker alert! That’s the only way to describe Justin Bieber‘s choice of clothing during a recent break in Florida. The now 18 year old tween idol is desperate to prove he’s all grown up. But wearing a tee with an expletive deletive splashed across the front is just plain immature and girlfriend Selena Gomez was not impressed.

The Biebs wore the tee with the words F*** You From Miami emblazoned across the front out to lunch. Selena also chose a slogan tee – but with the inoffensive phrase You Make Me So Happy. Well, Justin certainly wasn’t making her happy. She was furious with his choice of clothing. And when fans came up wanting pictures she looked more than a bit embarrassed by her boyfriend’s try hard top.

The obscene tee wasn’t the only bizarre fashion choice the Biebster made. He was also spotted partying in a pair of odd shoes. As far as I know that’s not a trend – that’s just Justin thinking he’s being cool. I wonder what Selena thought about that?

Maybe the pseudo tough guy image is masking a boy-man who is freaking out about his new CD? There’s a lot of pressure for Believe to do well. Stars like JB can have a very quick career – hot one minute, not the next. He must be aware his 15 minutes of fame has been well and truly stretched and pretty soon he won’t be the new big thing.