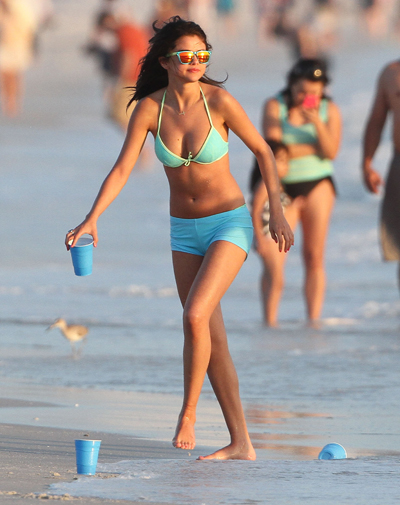 Up until now, Selena Gomez has been known for two things: being Justin Bieber‘s girlfriend and her role as Alex Russo on the Disney Channel show, The Wizards of Waverly Place.

But, according to her latest comment, it seems that the 19-year-old is hoping to shed her squeaky-clean image as a teen star and become a “serious actress.” So, of course, she decided to take a role in a cheesy film called Spring Breakers.

As the title implies, Selena plays a character involved with a group of college girls that decide to don neon-glow bikinis and rob a bank while on Spring Break in Florida.

Shakespeare, the script is not, but Selena claims that the role “stretched” her:

“I was getting kind of repetitive in terms of the roles I was picking, and I really wanted to do something that was completely different. It was a mark thing for me–like, ‘This is what I want to be doing.’ I want to be taking myself seriously as an actress, and this was definitely a stretch. I mean, I’d never smoked a cigarette before in my entire life. It was really funny–they had to show me how to do it.”

Tell us: Do you think this movie will break Selena out of her “good girl” mold? Related: Justin Bieber Jealous As Selena Gomez Crushes On James Franco