Shocking News: Kristen Stewart and Robert Pattinson Are Having A Baby 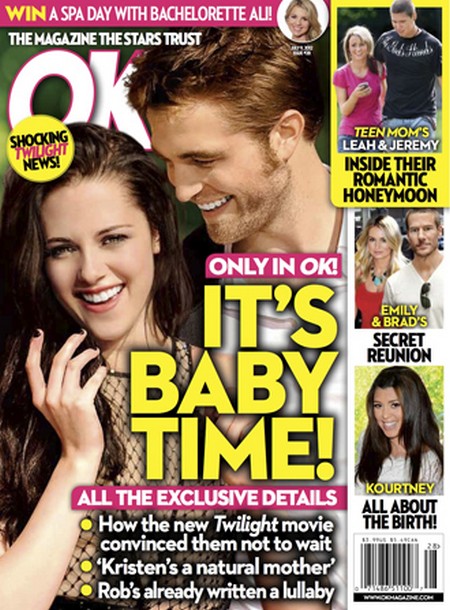 The current issue of OK! Magazine features the cover story ‘It’s Baby Time For Robert and Kristen.”  The magazine claims it has the shocking Twilight news that Kristen Stewart and her boyfriend Robert Pattinson are ready for a baby.

Of course OK! has all the exclusive details on how the new Twilight movie, Breaking Dawn, convinced them not to wait for a baby.  In the new Twilight movie Bella (Kristen) and Edward (Robert) have a daughter Renesmee, so I guess the two got some practice having a baby.  The magazine claims  Kristen is going to be a natural mother and Robert has already written a lullaby for the new baby.

Our spys caught up with Robert and Kristen at the wedding of pals Kevin Turen nd Evelina Oboza in Englewood, NJ and Kristen did not look pregnant at all.  However, we did hear that the two were all over each other displaying a lot of PDA.  What do you think are Kristen and Robert expecting a baby or is this just groundless speculation by OK! to sell magazines?  Hit the comments and let us know your thoughts!

Also included in this week’s magazine they have all the details on Kourtney Kardashian‘s upcoming birth.  They also have the scoop on Emily Maynard and Brad Womack‘s shocking reunion!  Why Emily anguishes over facing Brad – on national TV.

Of course what would a week be without Jennifer Aniston news?  Jennifer Aniston and Justin Theroux are fighting in Paris, according to OK! The shadow of Jen’s previous trip to France with Brad Pitt nearly ruined her European vacation with Justin.

To find out all the details on Kristen Stewart and Robert Pattinson having a baby and a whole lot more news, pick up the current issue of OK!