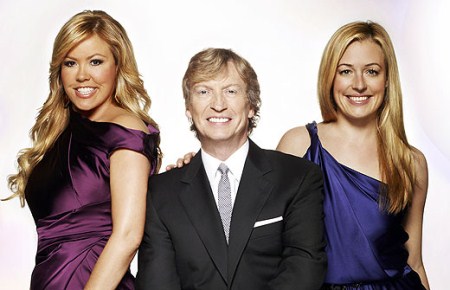 Tonight on FOX is an all new episode of So You Think You Can Dance. On tonight’s show it is the Vegas callbacks. If you missed last week’s show, we have a full and detailed recap here for you.

The bar was raised high last week and contestants realized that they really needed to stand out.  Witney Carson did a great job of doing just that, after she performed, to quote Adam Shankman, “Holy mother of god”, this girl is hot and just unreal.

Then there was Dee Tomasetta, she was absolutely stunning even before her music began, truly breathtaking.  Lindsay Arnold is another one that made it through, the judges think her career will skyrocket and she is great. Adrian Lee was this close to appearing on season 7 of SYTYCD but was cut at the eleventh hour by Mary Murphy, he has come back stronger and with a mountain of confidence and a great foundation.  Of course he is headed to Vegas.

181 dancers have made it through the audition round and onto Vegas.  There all but twenty dancers will be cut.

Tonight on SYTYCD is is “Vegas Callbacks” where the contestants will be hoping and praying that they get a place in the top 20.

Stay tuned for our live coverage of the show tonight at 8 PM EST! Meanwhile, let us know what you think of  season 9 so far and who do you want to be in the top 20 of  “So You Think You Can Dance?”

RECAP: The open auditions are over 181 contestants left and in 8 gruelling rounds over the next four days will leave us with 20 dancers. Not everyone will be able to take the pressure. They need dancers that can stand tall, genuine super stars.

Hampton Williams is first, he made Mary Murphy cry in the auditions. The judges are clapping and the audience give him a standing ovation.

After the first ten solos, Nigel stopped everything.  Jennifer and Brianna are asked to step forward, they are sent home.

Janelle Isses is next and she is ready to rock it on stage and the judges love her.  Great belly dancing!

Choreographers Twitch and Comfort are going to be taking hopefuls through the groove and the funk.  This year there

Captain, Andre, Forest, Syrus made it to Vegas; this is the first time they have had to pick up someone else’s choreography. Hampton finds the choreography too fast, Nigel tells him that he is fantastic, he touches them; with that he bows out of the competition. OMG, I can’t believe it.

Andre is also having problems, he walks out as well.

Forest is trying hard to prove himself.  Nigel is upset with Andre’s performance and he is such a dan of dragon house, Andre is going home.

The “Praying Mantis” is gone home and so is Bree. Many of the non hip-hop dancers made it through.

It is finally Cyrus’s turn to prove himself, he makes it through.

It’s early morning on day two, the hopefuls are getting ready for the next challenge. Tyce Diorio is now choreographing the dancers. Whitney Carson and Lyndsey Arnold were standouts in the auditions, can they do it tonight? Yes, they make it and so do their tops; Nigel was really excited, I wonder why?

Alexa Anderson is ready to perform, last season she was the final person cut before the top 20 was announced.  I think she is doing good because Tyce looks in shock, because it’s good? Tyce tells Alexa that he is so tired of saving her because she is dead, she gives absolutely no light. He goes on to tell her to dance like she wants it. Joseph and Tre step forward, not quite there, they go home. Alexa makes it, but barely.

Teddy doesn’t make it, he heads home with a bad attitude, he is not happy about being reprimanded in public and declares he will never return.

It’s time for jazz Sonya Tayeh will be choreographing. Shafik is having a hard time, his partner Danielle, who is trying to encourage him but it’s not working. After an hour, it’s time to put up of shut up. Nigel tells Shafik that he messed up.

Shaik and Rachel are cut, but Rachel is not going without a fight, she pleads to the judges. The judges give her a chance, she will be able to dance for her life.

The jezz round is claiming more victims. By 5:30pm, more girls than guys had been cut. Giovanni gets cut, just after he kicks Danielle in the head during their performance. Amelia is up next, she’s sinking her teeth into Vegas week. Cyrus is back, I don’t know if he can do this one, he is partnered with Lindsey Arnold. Amelia gets to dance for her life, Cyrus makes it through with the rest.

Cyrus is overwhelmed that he made it through, the jazz round is over. The medics are concerned about Danielle, they take her in the ambulance to the hospital.

Two contestants are hanging on by a thread, Amelia and Rachel. First up is Rachel, she is staying  true to the Burlesque style. Sex sells, I guess that is what Rachel is going for.

Tyce looks disturbed, Nigel stops the music, it is no votes across the board, the judges find that her whole appeal is sex, Debbie tells her to put on more clothes and just dance next time. Wow, that was rough!

Amelia is good, but Nigel is not impressed. Amelia still gets enough votes to make it through, she promises to be a different animal moving forward.

The next routine is group routine. The twist this year is, you get to pick your own group. The dancers all go to the lobby to pick groups of five or six. Then they pick CD’s at random and down to business. As the night wore on, the new friendships were pushed to the limit.

Danielle is back from the hospital and tries to fit in with a group and she feels bad that she probably messed them up. I think they were really nice to take her in.

4:00am and it’s time to sleep for some people. The first group performs, the one with Danielle in it. Nigel thought it was terrible and thinks they should all be sent home. The judges deliberate, Charlie and Danielle are going home. Leroy goes home. Taylor as well.

Even the dancers that made it through are upset to see the other dancer’s go home. Aubrey and her group, the highschooler’s perform. The judges love it, her group makes it through

Group after group improved after that performance and lots are getting through. Time for the final group, with Dres, Adrian and Alexa. Alexa didn’t make it last year, Adrian didn’t make is in season seven, what will happen tonight?

Debbie loves it, Tyce feels that Alexa’s lights are on but nobody is home. Alexa starts crying and the judges are thrilled that she is releasing emotion.  Wow, they all made it through and head to the pool to celebrate.

Time for the cha cha and choreographer Jason wants chemistry or they are out. Cyrus refuses to be intimidated and man this guy is trying really hard. Leo and Amber step forward, they are through. Others get through as well, it’s now up to Cyrus. Cyrus is given a chance to dance for his life.

More people are cut, Amber, Dee and Asher are going home. Aubrey didn’t make it through and she is very upset. Four years and she doesn’t know what she is doing wrong. Sad.

Stefan Stewart, a hip hop dancer, makes it through. Poor Alexa is next, I am rooting for her, I hope she makes it. OMG, the judges love Alexa. Wow, the judges think she was one of the best of the day. Nigel loved it and so did everyone else. She has a star by her name, awesome.

Cyrus is dancing for his life, he is really excited to show the judges what he can do. All I can say is WOW, this guy is ridiculous. The judges loved it, Cyrus is going through.

One more choreography challenge, there are 52 people left and it’s 9:30pm, time for contemporary with choreographer, Travis.

Everyone is so tired, the are tears and many look like they are going to break down. Nigel makes an announcement, they won’t find out who is in or who is out, till the end of the day. The performances are over and Nigel calls Lindsey, Janelle, Trenton, Whitney, Amelia, Cyrus, Tiffany all to the stage. Nigel asks dancers to do it one more time, because some are just not making the cut.

Joshua and Mariah are last.  Joshua and Abigail made it through, Mariah and some others didn’t make it. After a long day, the remaining contestants go to bed.

It is just the final solos. Joshua tries to do a new trick and he flips backwards and passes out, another one leaves in an ambulance.

Joshua’s accident has shaken everyone. Every dancer will dance a solor and tell the judges why they deserve to be in the final 20. Alexa is first, Debbie makes a comment that she could win all this. Alexa wants to grow in front of America, she wants it more than anything.

After that. all the dancers give their all. The judges have tough decisions to make, Chehon is last to dance. He is an amazing ballet dancer, but he wants to break out of his dance style, that is why he wants to be in the top 20. The solos are over, Nigel calls all the boys to the stage.

Nigel apologizes because he has to release some great dancers; Tre, Dreys, Adrian and Brandon are all cut. Crap, there are some really good dancers there. Now the girls turn, they are not cutting any of the girls.Awesome, girl power! Time celebrate! Next week the judges will pick the top 20. it’s over, thank goodness.

Next week, we will find out what happened to Joshua who went to the hospital.