BY Cate Meighan on August 29, 2012 | Comments: 3 comments
Related : Reality TV, Recap, So You Think You Can Dance, Television 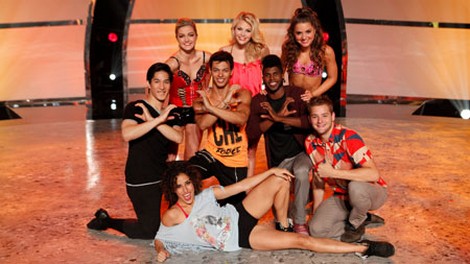 Tonight an all new episode of So You Think You Can Dance airs on FOX. This week the Top 8 dancers of Season 9 will perform and two will be eliminated.  Did you watch the last episode? If you did not we have a full and detailed recap here!

On last week’s show the Top 10 dancers performed for the first time with their All-Star partners. In addition, they performed an all-new group routine choreographed by Tyce Diorio.  Also featured was a special performance by the L.A. Dance Project.

The top eight remaining dancers open tonight’s show with a contemporary dance to Run Boy Run.  It’s not the best opening I’ve ever seen but they work well together and they have done choreographer, Peter Chee proud.  Tonight is another all-star night, meaning the remaining contestants will all be paired with a former SYTYCD contestant to perform.  Jesse Tyler Ferguson of Modern Family is the guest judge tonight, joining the regulars- Nigel Lythgoe and Mary Murphy. Along with performing with an all-star, each contestant also gets to do a solo for the judges.

Witney is up first tonight with Twitch for a hip hop routine. It’s “east coast style” and holy crap, she is amazing. You’d never know that Witney is a ballroom girl. She’s dancing with Twitch and quite frankly, I didn’t notice him and he IS hip hop. Nigel is stunned that she looks like she has been a street dancer her whole life.  Mary tells her she had everything to pull off the routine and she was livin’ it.  Jesse says he feels honored to be in the same room as the two of them.

Cole is lucky enough to have all-star Allison to help him through a contemporary piece by Sonja Tayed. At least at first I suspected that she would help him through but he danced up to her level and made this brilliant. Cole portrays a man with no soul and Allison is trying to win the heart that he is missing. Jesse thought it was brilliant and Mary tells Cole if he keeps it up, he’ll be in the finale. Nigel also believes that Cole was a strong partner for the always fabulous Allison.

Eliana joins all-star Ryan for a shot at the quick step. It’s usually a dreaded dance and quite often the kiss of death in this competition but this one was actually very entertaining. Eliana kept her frame all the way through and pulled off the dance with style. Jesse thought she was fabulous and Mary thought this might be a challenge but conceded that it could be crossed off the list of things that might trip her up.  Nigel comments on how whatever dance style she is given, that is what she transforms herself into for the week.

Ballroom dancer Lindsay is linked with all-star Alex for a Sonja Tayed contemporary number. There is no real story here, it’s just rooted in sexual tension and they play after each other throughout the whole piece.  Nigel felt it was brilliantly danced but lacked the heat. Mary agrees with Nigel, no chemistry with great dancing and intensity. Jesse agrees that the emotional connection was also missing, but gold stars for the dancing.

Will links up with all-star Lauren for a Christopher Scott hip hop routine. Will’s character is working through a lot of pain and Lauren is that part of his mind that will help. Sounds like a weird concept but basically Lauren spends the majority of the time dancing in unison with Will, behind him on a couch. They were in sync and it was really precise and just perfect.

Cyrus is up next with a jazz routine by Mandy Moore and he is partnered by last season’s winner, Melanie. This is cute and kitchy. Jesse says that Cyrus’ charisma made his eyes stay on him, rather than Melanie. Nigel agrees that his personality grabs people and it’s why America loves him. Mary thinks that Cyrus steps up each week and has improved radically as the weeks go on.

Chehon may be finding himself on the “hot tamale” train tonight with all-star, Anya. It’s a sultry tango and everyone is on their feet. He gave off major heat and his steps were razor sharp. This was Mary’s favorite number tonight. Needless to say, “He’s on the train.” Jesse takes a moment to state the obvious; all of the performances are insane tonight. Nigel is very impressed by the connection that he saw between Chehon and Anya.

Tiffany joins all-star Adee for a contemporary routine by Mandy Moore to the Celine Dion classic, The Power of Love. Jesse mentions how insane the lifts were and how he doesn’t want to send anyone home tonight. Mary says it’s Tiffany’s best performance of the season. Nigel suspected this would be fantastic and it just was.

Just like that, all of the dancers are called back onstage because it’s time for results. Both ballroom girls, Lindsay and Witney are in the bottom two for the girls. Will and Cole are also in the bottom. The judges will be able to save just one guy and one girl.

Lindsay is leaving tonight but will be joining the rest of the cast on tour later this year. Will is also going home just as he hit his peak. Two really amazing dancers had to go as we creep closer to the finale!

Tune In Next Week – For Another Amazing Live Recap!