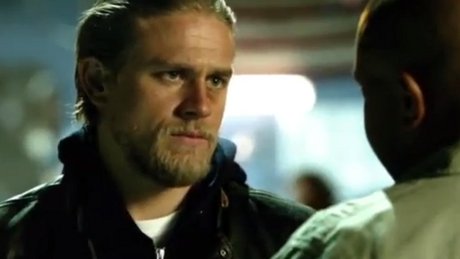 Sons of Anarchy continues to drive home its epic fifth season, and if you watched last week’s episode then I’m sure you’re already getting pumped up for next week’s episode, which is titled “Ablation” and promises some wicked violence — among other things. If spoilers make you sick to your stomach, then divert your attention this instant. The preview and spoilers won’t totally ruin the new episode for you, but if you like your viewing parties to be squeaky clean and shiny and not tainted with our spoilage, then best check out some of our other juicy gossip.

This episode will feature some intense action, where wild bonds are shattered, strong alliances fall apart, and new deals are made. And who doesn’t love a new deal? If you watch the preview clip below, you’ll see that Eli tells Jax that some shady people are talking to the feds. After he makes that announcement, Eli makes an appoint to make an interesting proposition, one that might put Jax in the crossfire of harm’s way. “Give ’em to me and I’ll give you the rat at your table,” Eli says. Wonder where this proposition will go and how Jax will respond?

In the opening clip we catch a glimpse of a chase scene and some intense gun action, which always makes us fear the livelihood of the characters a bit. There’s also a body that gets thrown out of a window — and that’s never a good sign.

Watch the preview below and let us know what you’re excited about! How do you feel about this season of Sons of Anarchy? Is it going well for you? What do you want to see happen next? Any characters that are just getting on your nerves? Season 5 Episode 8 “Ablation” airs Tuesday, October 30th on FX. Check it out and make sure to come back to CDL for all your TV spoilage needs!