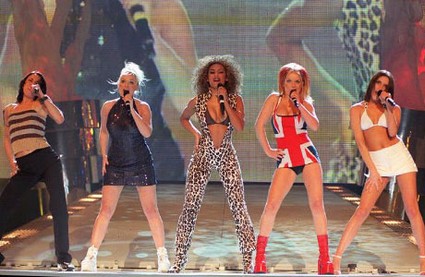 Better strap into your bustier and platform trainers folks, because if Mel C has it her way the Spice Girls will be reuniting for the 2012 London Olympics!

A source told RadarOnline today, “Mel B is pushing for it to happen. It would be an opportunity of a lifetime for the band to perform in front of a worldwide audience, in front of the best athletes in the country—well, there are no words!”

The last time the ladies reunited was for a highly successful world tour 4 years ago in 2007. Mel C— a.k.a. Sporty Spice—has since forged a successful theatre career, but reportedly said, “The Olympics would be brilliant, but I don’t know the truth. I’d love to do something, but it would have to involve all five of us.”

According to RadarOnline, getting all five of the girls together may be more of a challenge than anticipated. “Mel B and Emma Bunton are agreeable to doing it, but the holdout seems to be Victoria Beckham. She has so much going on and she isn’t agreeing to it—yet!”

However, Victoria, who gave birth to her fourth child in July may change her mind if David plays for Great Britain in the games. Still a valuable player, Beckham has just signed a new two-year deal to play for the Los Angeles Galaxy.

Even if the Olympics reunion is a no go, SG fans can still look forward to a musical based on the band. English comedian Jennifer Saunders has written the script, titled “Viva Forever,” that was given a green light by all five of the Girls. “The girls are so very excited for their musical to be released,” an insider said. “They absolutely love what Jennifer Saunders has done with the script. It’s going to be unlike anything anyone has ever seen on stage.”