BY Jeanne Adams on May 22, 2012 | Comments: one comment
Related : Kate Middleton 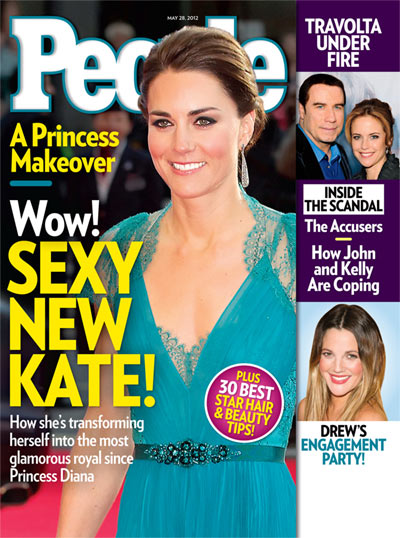 Kate Middleton is bringing the sexy back to Buckingham Palace with her new, daring fashion choices. The Duchess of Cambridge has undergone a sartorial transformation of late opting for thigh high slits and plunging necklines instead of her usual prim and proper attire. But People magazine reports this clothing about-face has less to do with how the Duchess looks on the outside but how she feels on the inside.

“She is becoming more adventurous with her fashion choices,” Kate’s stylist pal, Nikki Pennie tells People. “She’s always been glamorous, and now even more so.”

I would argue it’s not hard to be glamorous when you have help but I’m sure People would shut me down since it claims Kate still does her own make-up and does not use a stylist. But she does have stylist friends… how convenient, and Pennie says Kate’s new confidence stems from her finally beginning to relax and enjoy her role in the Royal family. “High-level glamour is becoming more of the norm for Kate due to her role. She is becoming more playful, putting her hair in gorgeous updos to complement certain dresses. She is clearly enjoying the process and becoming more confident.”

Let’s clarify. She’s put her hair up once, maybe twice. Let’s not go lighting the beacons yet. And the “sexy” dresses, a.k.a. dresses not buttoned up to her chin, are few and far between. In fact, Kate was up to her old L.K. Bennett shoes wearing self at last week’s Royal lunch hosted by the Queen in honor of her Diamond Jubilee Celebration. The palace welcomed royalty from around the world including Princess Charlene of Monaco and Queen Rania of Jordan. Kate wore a delicate pink coatdress from Emilia Wickstead. It was appropriate. The Royal luncheon was probably not the place to flash some side boob but I’m just saying, she’s no Princess Diana yet.

Simmer down! I know you’re all b*tching at me now saying, “But she doesn’t want to be like Diana. Stop pitting the two women up against each other!” And I’m saying, “Oh, really? You don’t think there’s a little of that going on?” Especially since “pals” of hers are talking to People magazine boasting of her recent fashion coups? She’s thinking it, believe me and I’m not hatin’. I’m just saying, let’s call a spade a spade.

You guys know I love me some Kate Middleton, I’m just trying to play devil’s advocate. And if I were her I would have embarrassingly glued myself to Queen Rania during the entire luncheon. That woman knows how to turn out the fashion and stay dignified. How she has no hips after having four kids is beyond me. But she maintains a gorgeous public figure because she know it’s her job but she also is refreshingly smart and actually uses her college degree to turn attention towards global education and the misconceptions of Islamic women.

It’s cute and all that Kate’s fashions are indicating her confidence but she should take a page from Queen Rania and let her actions do that for her. Then the clothes can follow.