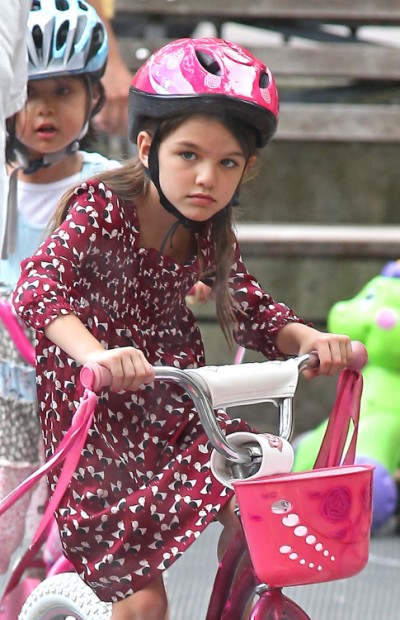 They’re calling it the Suri Factor but it has nothing to do with what new outfit Suri Cruise is debuting to her loyal public. Her new crowd is slightly less adoring. Some parents of children who will attend the exclusive $40,000 private school in NYC with Suri this year are considering pulling them from the “global” school because of all the attention Suri is bringing with her. “I had two different parents call to tell me their children are beautiful young girls that look like Suri,” education consultant Dana Haddad told Page Six magazine. “The girls will all be in uniforms, and they’re worried their daughters will be mistaken for Suri by the paparazzi outside the school.”

In all fairness, it really isn’t Suri’s fault the big scary men with cameras follow her around day and night. But I doubt the snooty parents care about that especially since Tom Cruise and Katie Holmes are expected to reunite for their daughter and drop her off to her first day of school together. Please, parents calm down! The paparazzi won’t care about something as mundane as that. I bet the day will be totally normal and quiet. You’re overreacting!

But the parents might be the least of Suri’s problems. Page Six also reports that the little princess will definitely get her share of mean girls after her famous mom and dad and their security leave the building. It’s a tough lesson but not everyone loves you when they’re not getting paid to – especially rich, drama-prone little girls. “They’re not going to gawk,” Anisha Ahooja, a former teacher at the Dalton School on the Upper East Side said. “They’ll check themselves. It’s cooler to be the girl telling Suri Cruise, ‘You can’t sit here,’ than to be impressed.” SNAP! It’s like the real Gossip Girl and Suri is Little J! This scenario also reminds  me of the bus scene in Forrest Gump! Tears well up every time!

Will Suri be Little Forrest? There are so many similarities! Both kids aren’t fans of walking (although Forrest grows out of that and starts run-NING) and their parents have creative ways of getting what they want in life! Speaking of parents, those little trust fund brats better check themselves before they wreck themselves. Do they know who Suri’s dad is? Probably not. They’re too young. But I’m sure their parents know and they better tell their little demonic cherubs to can it with the bullying. Would you want Suri crying home to Tom about something nasty you did? I didn’t think so! Scientology has a long arm. Actually it’s more like a Hydra. Katie Holmes can keep chopping off the heads as much as she wants but they’ll just keep doubling back. Those parents better recognize!

Would you want your kid going to school with Suri Cruise? Bullying and whispering behind each other’s backs seems normal for grade school girls but what do you think Tom would do if he found out Suri was on the receiving end? He doesn’t do things like a normal person so I’m interested to hear what you come up with!