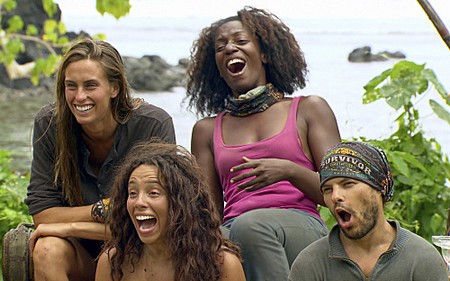 A brand new episode of Survivor: One World airs tonight on CBS and it is called “I’m No Dummy.” Stay tuned as we live blogging the episode with all the up-to-the-minute details.

On last week’s show after tribal council Jeff tells the remaining castaways: “Given that half the tribe members have their name written down tonight if there wasn’t a reason to be paranoid before there is now.”  So we can expect a lot of paranoia tonight.  Last week the women led by Kim continued to dominate the game.  They managed to convince Jay that he was part of their alliance and they blindsided him and vote him out.  If you missed last week’s episode – you can read our full and detailed recap here.

On tonight’s episode the castaways go on the attack when one tribe member forces a confrontation, and a heartfelt message from home brings the Tikiano tribe to tears.  Troyzan realizes that he is completely alone now and the game becomes Troyzan vs everyone else.  Troyzan realizes what the women are up to and thinks the remaining men are ‘knuckleheads’ for not seeing it.  The women think they have Troyzan outsmarted but they should not underestimate him.  Chelsea says Troyzan has now put a target on his back.  We will see!

During one of the challenges Troyzan mocks the other tribe members and tells them: “It is his island and they can’t beat him.”  Kim is worried and hopes she can get rid of Troyzan before he sends her home.  Looks like a great episode!

We will be live blogging the show tonight at 8PM EST with all the exciting happens.  So don’t miss the recap, come and spend the evening with us!  Make sure to refresh often to get the most current updates!  While you wait for the show to start you can check out a sneak peek of tonight’s episode here!

Troyzan tells Chelsea that there are three or four people that should go before him. Chelsea tells Troyzan and he shouldn’t take it personally. Chelsea tells him that he should behave like J he took it like a man, it’s only a game. The tribe members cat tree mail with a bunch of envelopes. Each envelope has the name of one of the tribe members on it. In the envelope is money. There will be a survivor auction. Jeff welcomes everyone to the survivor auction. He tells the tribe members they cannot pool their money and they cannot share the reward.

The first item is three donuts and iced coffee, Chelsea gets it for $160.

Next item chips, Guacamole only and a Margarita, Sabrina gets it for $300.

The next item is a protein drink with bananas on the side. Leif was it for $100.

Next item survivor shower with shampoo, toothbrush and a face cloth. Kim bought it for $40.

Next item Peanut butter and chocolate. Kim wins it for $240.

Next item letters from home. Alisha bids $500 and gets her letter.

Jeff offers the other tribe members of their $500 they can buy their letter to. Tarzan decides to buy his letter, Jeff asked Tarzan if he wants to share his letter and he says no.

Troyzan is upset and Jeff asked him how he is feeling? He tells Stephanie feels completely on his own after last night’s tribal Council.

Next item an advantage in the next immunity challenge. Troyzan Tristan wins it for $420. Troyzan tells Jeff that he feels like the whole team is against them is him against the team.

Next up is a covered surprise. Buys it for hundred and $60. A note comes with the cake. Finds that the she Spot the cake for the whole tribe and they have 60 seconds to eat it.

The survivor auction is over.

Troyzan decides to start looking for a possible Immunity Idol he does not care who sees him.  The rest of the tribe members see him and they decide to look too.  They figure there are 8 of them and they have a better chance of winning than Troyzan alone.

The one thing they did not want to happened may happen.

Troyzan got to jump to the second round of immunity challenge. The challenge was close but Troyzan was victorious.

The woman are worried-I think that may beTroyzan has immunity idol.

The members of the jury commends Jonas, Michael and Jay.

Jeff says to Troyzan that both at Tribal Council and Reward challenge there was a lot of animosity towards the other tribe members. Sabrina attacksTroyzan and tells him that the game is not just about outwit it is about making people like you. She tells Troyan he has to be nicer. He tells her she is not his mother annual talk the way he wants.

LEIF IS VOTED OUT!!!