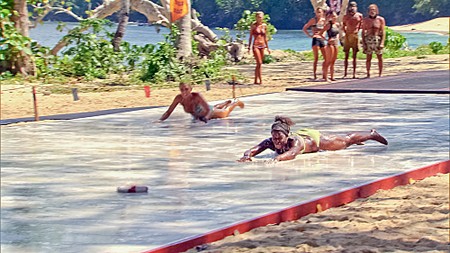 A brand new episode of Survivor: One World airs tonight on CBS and it is called “Never Say Die.” Stay tuned as we live blogging the episode with all the up-to-the-minute details.

On last week’s show the castaways got totally pissed off at Troyzan.  Troyzan finally realized what the women were doing and he decided it was no holds barred anymore and he said whatever he wanted to.  He realized that he was completely alone and the game was now Troyzan vs everyone else.  Meanwhile the women continued to underestimate him. Much to their disappointment he won the immunity challenge last week-so their plan to oust him failed.

Troyzan tried to convince Christine, Alisha, Tarzan and Leif to vote with him and get rid of the ringleader of the women’s alliance.   But as he said they are ‘Knuckleheads.’  He failed to convince them and Leif was voted out and sent home.  If you missed the episode, you can read our full and detailed recap here.

On tonight’s episode the castaways must oil themselves up for a wet and wild immunity challenge. While the lucky winners enjoy a picnic vacation, Tikiano’s sore losers strike at the chance to powwow at camp, and feelings of alienation drive leery tribe members to seek out all of their elimination options.

From the preview it looks like we might see a hissy fit and a cat fight tonight.  Troyzan tries to convince Kat to betray Kim and it looks like there may be trouble in the ladies alliance.  Will Troyan be successful?  We will find out tonight!  Another episode not to miss!

TONIGHT’S RECAP: Tarzan finally realzies that the men are down two 2 left.  He knows to stay around he has to win immunity or follow whatever the women say.   Kim is upset that at Tribal Council her name was written down a couple of times.

The contestants get tree mail. They are going to have a reward challenge. Kim doesn’t want Troyzan, Alicia or Christina to be back in the camp alone so she wants to try to make sure that doesn’t happen.

They are going to be answering a series of questions about their fellow contestants. As a group they are going to have to try to come up with the answer that the contestants made. Each time a contestant gets the question right they will be able to chop the someone’s rope.

When a person’s rope is chopped off they are eliminated. First out of the challenge Troyzan, Tarzan, Chelsie, Kat, Sabrina, Christina, Alicia.

Troyzan says he feels it is clear where the alliances lay Kim, Alicia and Chelsea are together while Christina, Kat and Sabrina are at the bottom.

The girls are excited to be in the helicopter. Chelsea is loving all. And she is excited that she is coming here with all her friends. She hated the game she just played-because she didn’t like the questions that were asked.

Kim feels like a lot of the people lost are back at Not happy-Kim things are going to have to do damage control in the get back.

Kim is frightened because of what happened not to reward challenge she feels the tide could change.

Kat is pissed off, she did not like Kim’s comment when she said that Chelsea was hungry and that’s why she took Chelsea with hert.

Troyzan realizes this is the perfect time to play with the contestants head. He tells Kat he needs to wake up and smell the coffee. He tells her the only reason she is mad is she realizes she has been taken advantage of the other girls and she is upset.

Kat is really upset and Sabrina tries to calm her down and tells her not to let Troyzan not to get in her head.  Sabrina thinks Troyzan is really savvy-he knows the right time to play with peoples heads.  Christina believes Troyzan and is starting to sway.

Kim, Chelsea and Alicia get back to the camp. Kat is worried she does not understand if what Troyzan said was just see you he put in her head or was it true.

Kim takes Kat aside and tells her not to be mad. She she tells Kat she adores her, but this morning she was just playing the game.  Kim tells Kat that it has been such a fun day for her because she didn’t want to when the challenge today.

Lisa then realizes perhaps not taking Kat on the challenge was a bad move.

They’re all around the campfire and a giant pig walks in front of the campfire. So they get a rope then there running after it, Christina grabs an axe and they start to fantasize about what they can have if they killed the pig.

Troyzan joins in for fun.  He laughs as the girls talk about bacon sandwiches.  Obviously they do not catch the big!

Troyzan is through worries, and he is depressed. They realizes not over. Meanwhile, Kim is worried that Troyzan will play his immunity idol (however he really doesn’t have one, he has been pretending he has).

So the girls decide to split the vote, they will vote for Christina and Troyzan and they give Christina a story as to why they are doing it so she won’t freak out.

Alisha is laughing at Christina behind her back because she feels she is stupid that they can get her to do anything they want.

Christina talks to Troyzan -she doesn’t trust the women hundred percent.  Christina tells Trozan to vote for Chelsea and so will she.  Christina is tells Troyzan that they are going split the vote by putting her name down.

Troyzan is excited because he realizes he can put Christina’s name down and then get Christina sent home.

Troyzan close to speak to Tarzan and then he tries to speak to Kat Kat to convince her to change her vote.