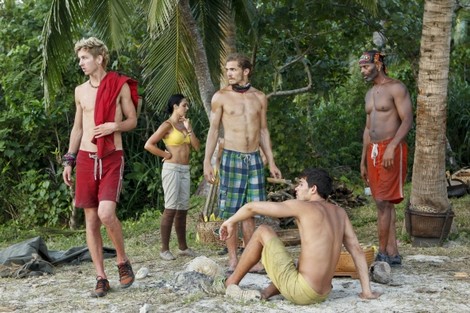 Tonight on CBS SURVIVOR Philippines airs with a whole new episode called “Not the Only Actor On this Island.” On tonight’s as As two tribes merge, contestants try to solidify their rank; Lisa Whelchel is confronted about her past.  If you missed last week’s episode we have a full and detailed recap for you here!

On last week’s show the castaways got down and dirty to battle it out for a fruitful feast. Lisa Whelchel, 49, who played Blair on the Facts of Life ended up wrestling with sex therapist Denise Stapley, who is arguably the strongest woman in the entire competition. In an unprecedented move, opposing tribes took to the bargaining table to strike a deal mid-challenge. At tribal council, Denise thought she might just be going home because she was the new tribe mate on the block. When they votes – Kate 3 votes, she is sent home, Penner didn’t get his blindside this week, there’a always next week.

On tonight’s show After Tandang and Kalabaw tribes merge, castaways scramble to solidify their numbers and rank in the new tribe. Meanwhile, Lisa Whelchel is confronted on her past as a former TV teen star.  We already knew that Michael Skupin recognized her right away, so we are about to find out who else is aware, or will Michael let the cat out of the bag?  How will this affect the game?  Will this play against Lisa?

Tonight’s episode: Eleven survivors left, who will be voted out tonight? Denise is frustrated that she attended her sixth Tribal Council in a row. Jonathan thinks he has Jeff’s trust yet he was surprised that his name was written down.

There’s a merge! Tribes have ten minutes to pack up their belongings. Denise is thrilled and she wants to go back to her original alliance with Malcolm.

The tribes arrive and Jeff has a priority from day one of the merge, a veteran should not win. All the tribe mates sit down, enjoy some food and drink that was left for them to celebrate and get to know each other.  This is Michael’s first merge and he notices that the power alliances are being quiet.

Lisa decides to hang everyone’s clothes to dry and when she gets to Malcom’s things, she discovers the hidden immunity idol. Malcolm knows what Lisa discovered and she tells him that she didn’t mean to. Malcolm decides better to bring Lisa into his alliance, what else can he do at this point. Lisa is fine with the deal, but she realizes that she is not the only actor on the island and she could be being played. Jonathan knows about Lisa’s past as a child actor and so far, he is keeping it to himself.

Jonathan scopes out Michael to see if he will back stab the people on his former tribe. RC thinks she is solid with Michael and wants to make sure it stays that way. Jeff is still stomping around the tribe telling everyone that he doesn’t want a veteran to win.

Basically it comes down to the majority of the tribe wanting to get rid of either RC or Jonathan.

Time for the Immunity Challenge, first thing Jeff does it take back Tribal Immunity and now Individual Immunity is up for grabs. Each tribe mate has to hold on to a spool that holds a bucket with 25 percent of their body weight, the man and women both standing at the end, win immunity. Ridiculous, Michael is the first one out with other guys dropping and the women are still in it. Lisa is the first women to drop with Malcolm following her. RC and Abi-Marie both drop at the same time, which means Denise wins for the women. There are still three men left and at the fifteen minute mark Artis drops. Jeff and Carter are the last two still holding on. Jeff drops out, but makes a deal with Carter first, Carter wins immunity.

Jeff and Carter sit down for a chat, Jeff wants Jonathan out and he wants Carter’s help. During this conversation, Jonathan walks up and tells the two that they have his loyalty. Jeff knows that no matter what moves he makes, its not going to sit well with either tribe.

Abi-Maria and RC start arguing at Tribal Council. The rest of the tribe mates discuss the fact that one tribe has a lower ratio than the other, but nobody seems to be too worried about it. Jeff thinks there will be a blind side tonight and it’s time to vote.

Jeff asks if anyone has an immunity idol they should show it and Jonathan produces his, therefore, any votes for him will not count and there are five of them. Pete gets two votes and RC gets four, the first member of the jury and leaving is RC.