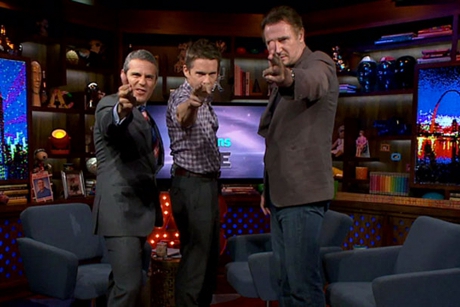 I have to admit, I’m a fan of Bravo’s Watch What Happens Live and when I found out that Liam Neeson was going to be stopping by I was giddy. He’s one of those guys that’s sexy just reading a phone book, so I had to tune in. Andy Cohen has had recent guests reenacting scenes from The Real Housewives of New Jersey, you know, some of the most recent blow outs between the ladies! (The only thing funnier than watching Teresa Giudice and Joe Giudice go at it was watching fellow Jersey-married couple, Kelly Ripa and Mark Consuelos imitate them from head to toe last week!). Also stopping in last night was Ethan Hawke and both actors did their very best impersonations of Caroline Manzo and Teresa Giudice, wigs included.

As much as I love Liam, I think Ethan did much better here. He clearly has the Caroline Manzo bravado down in this clip. Also he zeroed in on the way she explodes in spurts and sputters!

Andy also called Liam on the carpet for his latest red carpet pose, known as Irish Steel. According to Liam it came about because after striking a typical pose the photographers started asking him to do a real pose, something different, so as a joke he did this weird pointing motion and it just took off from there. Of course he took a minute to stand up and teach Andy and Ethan how to perfect the Irish Steel for themselves.

Check out both clips below and tell me which Thespian makes a better Jerseygirl — Ethan or Liam? They’re quite funny, and I think you’ll get a kick out of them.  As a sidenote, am I the only one who ever in a million years thought that Liam Neeson would agree to be a guest on this show?