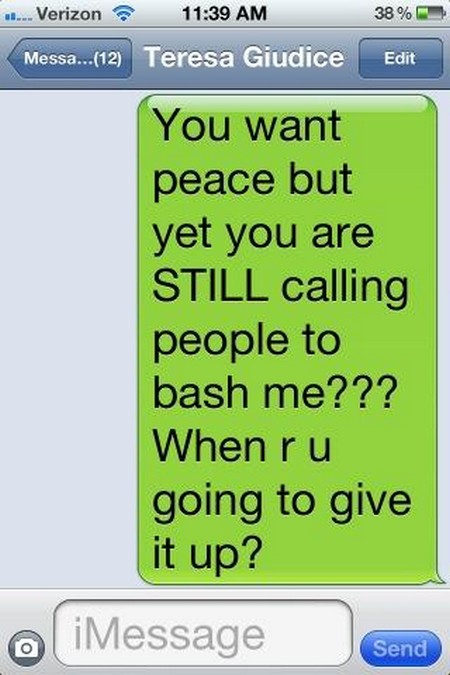 Teresa Giudice is a professional victim. Despite the fact that she leaves a trail of drama and devastation behind her after nearly every conversation, we should feel sorry for her.  The poor little Jersey girl that doesn’t pay her bills but expects to live like a princess thinks that the entire world (or at least the whole state of New Jersey) is out to persecute her and her criminal husband and out-of-control kids. She sat down to talk with Anderson Cooper, on his show which aired last night and of course she had to try to divert attention away from the hailstorm of bad press she’s getting, by playing the victim.

Teresa claims that former best pal, Jacqueline Laurita keeps texting her and that the interaction is completely unwanted. Teresa is actually threatening to go to the cops over Jacqueline’s texts!

“If it keeps going, eventually I am going to go to the cops because I want her to leave me alone. I did nothing to her,” Giudice said. “When I get texts from her I get chills throughout my body because I am like ‘why?’ I haven’t spoken to her in a year. I never reach out to her.”

Ironically, if you watch the clip Anderson wasn’t feeling very sorry for Tre but instead, in his own way called her on the carpet for her behavior towards Jacqueline, scolding her for not being a better friend!  Jacqueline took to her Twitter after the episode aired an issued a comment or two of her own saying,

“Teresa shouldn’t go on TV to say I’m threatening her unless she wants a defamation suit against her” tweeted Laurita. “I’ve tried2get her to stop& she doesn’t. Let’s make a deal @teresa_giudice I won’t interfere in your life if you’ll stop interfering in mine. Lets keep each other’s name out of our mouths.”

I have to admit, I have a hard time believing that Jacqueline has harassed Teresa in the last year. Maybe a text or two with a purpose, but that’s it. It just looks like another instance of Tre taking an already huge mess that she created, and fanning it. I think Jacqueline would go after her legally if the crap doesn’t stop! Do you agree? Tell us your thoughts below!