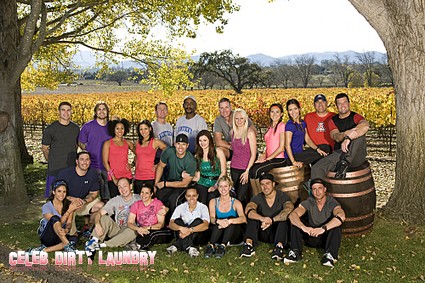 Did you watch last week’s show when the teams took off for their adventure across five continents, 22 cities and close to 40,000 miles.  If you missed any of the show, you can read our full official recap HERE.

Tonight’s episode is an all time stress overload and sees one couple completely break down into tears when a challenge goes awry, I wonder who it is going to be? Do you think it’s Brenchel? Yep. Meanwhile, there is chaos when racers are required to sharpen their mathematical skills at an enormous and the world’s very largest, cattle market. Which team is having trouble with a donkey? Who’s really good at Lego? And you know I’m a huge fan of Brendon and Rachel from Big Brother, but why are there no tears when Rachel “cries” ? Bopper and Mark try to show Brendon and Rachel what it is like to work on a dedicated team, when they ace the “Lego” challenge.

One more little tidbit from tonight, Rachel has an explosive outburst with one of the other women, I’m just surprised it took her this long and this is why I love her, lot’s of drama when she’s around.

Official Synopsis: The race continues in Buenos Aires, Argentia, where teams are required to use their math skills at the world’s largest cattle market.

Don’t forget to come back tonight at 8:00 PM when we will be live blogging the show with all the up-to-the-minute details.  You don’t want to miss it!  Refresh often to get the most current updates!

RECAP: 10 teams remain, who will be eliminated next? It’s the start of the second leg of the race, Rachel and Dave are first to leave since they were the first team to arrive at the pit stop. Rachel R. and Brendon are next, followed by Art & JJ. They head to Cafayate Town Square, but there will be a considerable delay, so Rachel and Dave have now lost their lead. Joey and Danny are the last team to leave, but everyone meats at the Square and have to wait until daylight. Teams receive their clue from the “Chasqui”for a Detour, “Boil My Water” where they build a solar oven and have to boil a pot of water or “Light My Fire” where they have to pack a donkey.

Every team decides to build the solar oven, except for Art & JJ who decide to head to the donkey challenge, but first get lost trying to find it. The other teams are still building while Art & JJ have packed their donkey and are on their way. Bopper and Mark are the first team to boil water and now have an 18 hour bus drive to Buenos Aires.

Art & JJ are done and on their way to catch the bus as well, they made a good decision to do this detour. Rachel and Dave are done, with Rachel R. and Brendon next. The rest of the teams follow suit, except for Nary and Jamie who are the last team to finish the detour.

Bopper and Mark, Rachel and Dave, Rachel R. and Brendon, and Art and JJ are on the first bus. Other teams are on the second bus, except for Kerri and Stacy, and Nary and Jamie.

The second bus is stopped, a window broke out and they have to cover it and tape it before they move on.

Rachel and Dave are the first team to get their next clue from the first bus, it’s a Roadblock, “Where’s The Beef”. Teams have to use their math skills, no calculators allowed, at the world’s largest cattle market. The third bus has arrived and they are hoping that there is a bus behind them, there is, the second bus had a two hour delay because of the broken window.

Rachel and Dave are the first team to finish and head to the next pit stop, El Gomero, a two thousand year old rubber tree, the last team to arrive may be eliminated.

Rachel R. is freaking out because she’s not good at math, Mark decides to help her out and work together, it works, both teams are on their way to the pit stop. Oh no, Rachel R. makes a mistake with the taxi, Mark and Bopper have gone but they are without transportation. Rachel R. has a meltdown and poor Bendon takes all the blame. Did he notice she didn’t have any tears?

Rachel and Dave are team number one again, they have have won a trip to Grenada. Three teams have arrived at the pit stop and bus number two has just arrived at the Roadblock.

David and Cherie are the last team to arrive and unfortunately they are both eliminated from the race. They put on their clown noses and walk off in the sunset, real troopers! That’s it for tonight, Rachel and Dave are still in the lead, will they be able to maintain in next week, or will one of the other teams move ahead? Be sure to come back next week to find out.