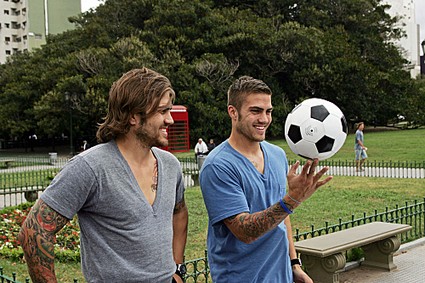 Tonight an all new episode of our favorite reality show The Amazing Race airs on CBS.  The show is called ‘Bust Me Right In The Head With It’ as the nine remaining teams depart from El Gomero rubber tree in La Recoleta, Buenos Aires on the next leg of a race around the world for one million dollars.  On last week’s episode David and Cherie were the last team to arrive and unfortunately they were both eliminated from the race. They put on their clown noses and walk off in the sunset, real troopers! If you missed the episode you can read our official recap here!

As the teams continue with the race my favorite team Team Big Brother, Rachel and Dave are still in the lead, but will they be able to maintain in this week, or will one of the other teams move ahead? Will Dave and Rachel make it three times a charm in commanding first place?  All will be revealed tonight!

On this week’s episode the Race travels to Paraguay for the first time ever.  The newest leg of the race will involve hands, heads, and hearts.  As Teams struggle to produce during a fruity challenge, and Racers face a harsh reality if they fail to perfect a local balancing act.

Don’t forget to come back tonight at 8:00 PM when we will be live blogging the show with all the up-to-the-minute details. You don’t want to miss it!  While you wait you can catch a sneak peek video of tonight’s episode here.  Refresh often to get the most current updates!

RECAP: Nine teams remaining, who will be eliminated next? The start of the third leg begins at the 200-year old rubber tree. Rachel and Dave are the first to leave with $200.00 for this leg. They head to the international airport to head to another Spanish country, Asuncion, Paraguay. Art and JJ get on standby with Rachel and Dave, but the teachers soon arrive and invite everyone else to join them. Bopper and Mark, Nary and Jamie also got on the standby, they are all on the first plane. The second plane is two hours behind and has the rest of the teams on it. The first plane lands, Art and JJ are the first team to get their clue for the detour.

Teams must choose either “fruit market” where they have to stack watermelons in a perfect 10×10 pyramid, or “strung out” where they choose a harp and attach 36 strings to their instrument.

Art and JJ, Rachel and Dave choose to stack the watermelons. The task is very physical and difficult considering the heat in Paraguay. Bopper and Mark, Nary and Jane also join the fruit stacking.

Art and JJ are the first team to get their next clue, they have to head to Plaza De La Democrazia. Meanwhile, Rachel and Dave, Nary and Jamie’s watermelon stacks are almost done and they give way. Oh oh, Bopper and Mark’s pyramid falls as well. On Rachel’s insistence, she and Dave are heading to the other detour. Bopper and Mark, Nary and Jane are also heading over to the other one.

Art and JJ are at the Roadblock. One of them has to partake in a Paraguay tradition, the bottle dance. A choreographed dance, they are given a lot of bottles and if they end up breaking them all, they will get a 2 hour penalty.

Rachel. R. and Brandon don`t last long at the watermelons, they find it`s too tough and head over to the other detour.

Art and JJ finish the Roadblock and head to the pit stop at Escalinata in Paraguay, they win a trip to the Bahamas.

At the detour for stringing the harp, Elliott and Andrew have a leg up as they have strung guitars before. Rachel and Dave arrive and find that the task is too difficult, so they decide to use their fast pass and move forward to the Roadblock. Dave tries to balance the bottles on his head, he smashes all of them which causes them a two hour penalty.

Elliott and Andrew quickly find that stringing a harp is not as easy as stringing a guitar. Rachel R. and Brendon are the first team to finish stringing the harp with Bopper and Mark closely behind them.

Meanwhile, Joey and Danny are finished building their watermelon pyramid. Vanessa and Ralph are frustrated, their pyramid falls apart. Ralph wants to leave, but Vanessa talks him into staying to show an example to his daughter in finishing what he started.

At the Roadblock, Rachel R., Bopper, Nary and Joey are balancing bottles on their head. Rachel R. is the first one to finish, Brendon tells her that she is on fire. Joey is finished next and he and Danny are in the run against Rachel R. and Brendon to arrive at the pit stop. Rachel R. and Brendon are the third team to arrive, but told they are in second place because of the penalty Rachel and Dave have.

Kerri and Stacy arrive, they are seventh.  At the Roadblock, Andrew is trying to balance the bottle on his head when Rachel and Dave arrive and are shocked that the twins are still in it. Ralph is the first one to finish, he heads to the pit stop with Rachel. Andrew finishes shortly afterwards, it`s a foot race to the pit stop with Vanessa and Ralph arriving in eighth position. Andrew and Elliott have been eliminated from the race. Elliott is devastated, but Andrew tells him that he will treasure this experience forever.

That`s it for tonight, come back next week when the teams head to Italy.