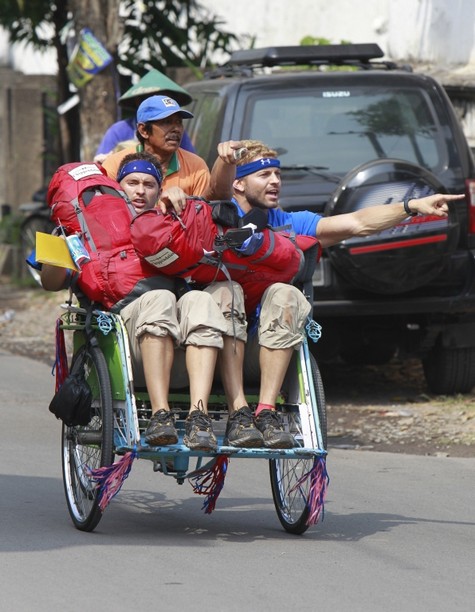 Emmy award winning, The Amazing Race returns to CBS tonight with a whole new episode called, “There’s No Crying in Baseball.” On tonight’s show The teams encounter a double u-turn as they race through Indonesia; contestants start to feel the heat.. Did you watch last week’s episode of the season last week? We did and we recapped it HERE for you!

On last week’s show the race continued in Surabaya, Indonesia and one Team made a bold move, but it could cost them the game, while another Racer broke down amid the frustration of a Roadblock.  Daniel and Amy and Abbie and Ryan had to ride on motorbikes alongside champion bull riders to the finish line in order to receive their next clue on The Amazing Race.  In Detour A, Married Monster Truckers Kelley and Rob had to deliver ten blocks of ice to the Pasar Ikan Pabean fish market in order to receive their next clue.

On tonight’s show as Teams continue racing through Indonesia, they discover that it’s every Team for themselves as they encounter a Double U-Turn, and Teams start to feel the heat of the Race as their heads are set ablaze.   Teams have to dress in some ridiculously heavy traditional costumes and then roam the streets in part of one of the local customs. It looks like all the teams have problems with the challenge.

Tonight’s episode 3 is going to be another fun one, which you won’t want to miss. So be sure to tune in for our live coverage of of the season 21 episode 3 of The Amazing Race — tonight at 8:00 PM EST! While you wait for our recap, hit the comments and let us know how excited you are about the new season of the Amazing Race?  Check out the sneak peek video of tonight’s episode below.

Tonight’s episode: The teams are in Indonesia and it’s the beginning of the next leg of the race. Natalie and Nadiya are the first team to depart, they also won the Express Pass in the last leg. Teams now had to head to a local restaurant for their next clue and they have to caution because there is a U-Turn ahead. The teams arrive and find a Road Block. This Road Block requires teams to serve twenty plates of food, at the same time. If they drop anything, they have to go back to the kitchen and do it all again.

James and Jaymes are the first team to complete the Road Block and receive their next clue. Teams now have to head to Surabaya train station to travel by train to another town and during the ride, they have to keep their eyes open for the next clue.

Gary and Will are the last team to depart and are heading to the restaurant while other teams have already completed the Road Block and heading to the train station.

The first train has left at 7:36pm, Natalie and Nadiya lost their lead as they were not on that train, the next train leaves at 10:55pm.

Teams receive their clues from a person on the train, they have to choose between Egg Head or Lion Head. Teams have to travel in a small cart that is attached to a bicycle and ridden by a driver.  In Lion Head, teams have to wear a huge lion head dress that is really heavy and perform a traditional walk down the street. In Egg Head, teams have to find a tiny little market and two eggs each, then hold a coconut half on their heads while two guys cook the eggs on the top of the halved coconuts, on their heads.

Teams then have to make their way to Perliman Pos 1. This is the Double U-Turn, any team who does it will remain anonymous.

Abbie & Ryan are the first team to arrive, they decide not to U-Turn anyone and are now headed to a local high school that is the pit stop for this leg of the race. James and Jaymes have also arrived, along with Trey & Lexi.

The first team to arrive at the Pit Stop are Abbie & Ryan, they have won a trip for two to the Fiji islands. The second team to arrive is Trey & Lexi, the third is  Jaymes & James, the fourth is James & Abba, the fifth is Josh & Brent.

Josh & Brent finally have the eggs cooked, they are now doused with hot sauce and they have to eat them. Gary & Will, Natalie & Nadiya, Rob & Kelly, Caitlin & Brittany are in the final four couples.

Gary & Will decide to use the U-Turn on Rob & Kelly, but little do they know that they have already passed the Pit Stop. Caitlin and Brittany are all mixed up when their driver takes them to the wrong place. Both teams are headed to the Pit Stop, it’s just a matter of who gets there first.

Gary & Will are team number eight and still in the game despite being U-turned. Caitlin & Brittany are the last team and have been eliminated from the race. The girls tell Phil that the driver caused them the race.