The Bachelor: After The Final Rose 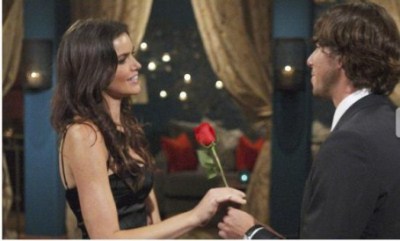 Did you watch The Bachelor season finale? If you missed any of it, you can read our full official recap HERE. Now, it’s the questions that all of America wants answered, what does Ben see in Courtney that everyone else didn’t. What is Courtney’s side of the story? Do we really care? Are they still in love and engaged?

Moments ago, Ben Flajnik did what all of America didn’t want him to do, he proposed to Courtney. Did Ben already have an affair with another women like the tabloids revealed?

Chris congratulates Ben on his proposal to Courtney.  Chris goes on to say that Courtney actually looked like she was enjoying tormenting the other women. Ben admits that he was having doubts and when he asked the other women for specific examples, they could given any except for telling him that Courtney was weird and different. Chris asked him if he was ever embarrassed. Ben says he was only embarrassed because he was not fooled by some temptress, she made it harder on him but didn’t mean it. He admits that he broke off the engagement after filming because of all the stress and didn’t talk to Courtney for a full weeks.

Chris asks about the rumoured affair that Ben had and he reveals that the photos are old of him and some friends. He admits that Courtney tried on wedding dresses to divert the attention just to screw with everyone.

It’s time for Courtney to come on stage and the audience boos her.She feels responsible for the reaction and confesses that the show brought out the worse in her. She says that she was very happy, but when Ben broke up with her she was heart broken. Chris asks if they are still a couple and she says yes, in her mind anyway – she starts crying. The million dollar question, are Courtney, the girl that everyone loves to hate, and Ben still together.

Here is where we are going to find out what is really going on, Ben joins Courtney on the stage. Chris immediately asks Ben why ‘when the going got tough’ did he get going. Ben blames it on Courtney’s behaviour with the other women, he was shocked. Meanwhile, Courtney felt abandoned at a real tough time and wonders if he will be there with her in the future since he bailed this time.

Chris asks Courtney if she can trust Ben again and she says not completely. Ben blames everything on his not being able to communicate with Courtney when everything was going on but he does love Courtney. Chris feels that they are optimistic but doesn’t understand where the two are going yet.

Chris goes back to the proposal in Switzerland and tells them that it really seemed genuine. Ben and Courtney are reduced to tears and full of emotion. Ben tells Chris that there beautiful moment was soiled by all the tabloids and rumours. Chris asks Ben if he still feels the same and says yes. Chris pulls out Courtney’s ring that he has been carrying all day and he admits that he didn’t know how this was going to go today. Chris wants to know where this is going, are they still engaged and should she be wearing the ring, he says yes. The two seem happy, but I can’t get past how badly she treated all the other women.

J.P. and Ashley are on stage to reveal how happy they are together, J.P. makes a joke about Ashley being pregnant, but it’s exactly that, just a joke. The couple are very happy and when Ashley finishes school they will be getting married, in a about a year from now.

That’s it for now. “The Bachelor” 2012 just ended and fans like me are ready for more. “The Bachelorette” 2012 with Emily Maynard premieres on May 14, 2012. This will be a two hour season premiere of the show, don’t forget to come back to CDL for all the recaps, wrap-ups and commentary from yours truly, Rosie. xo