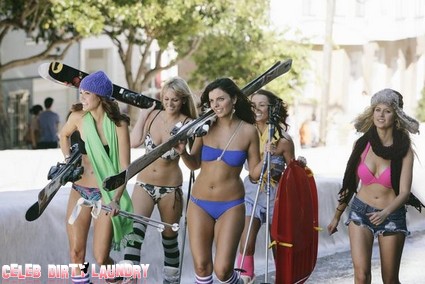 On tonight’s The Bachelor Season 16, Episode 3, Ben Flajnik takes the remaining women to his hometown of San Francisco where they have a ski day with teeny tiny bikinis.  On last week’s episode Jenna Burke and Shawn Reynolds were sent home, if you missed the episode you can catch up with our recap here.

So this week is actually a ‘fake’ group date that Ben takes the women on.  Well the snow will be fake and the girls pretending to like each other will be as well. Basically the girls, clad in their bikinis and Ben in his swim trunks, go skiing down a street in San Francisco.

Rumor also has it one girl is going to up and leave the show, who do you think it will be?   Was it because she didn’t have a connection with Ben or were the girls being too conniving and bitchy for her to handle?  We will find out tonight!

The competition for Ben’s rose continues to be fierce at the after party, but one emotional bachelorette crashes the festivities to give Ben some very unexpected news.  The anxiety this week is going to be crazy during the rose ceremony, one girl actually faints and another breaks down in tears. Drama, drama….

We will be live blogging the show with all the up-to-the-minute details and all the highlights and bitchiness at 8PM EST.  So come back and see what we are talking about!   While you wait for the recap, you can read (if you dare) spoilers that we posted a couple of days ago here!

RECAP: While in San Fransisco before any of the dates start, Ben meets up with his sister Julia at the Grove on Chestnut street and they ride around on a vespa.  The 16 girls arrive in San Francisco and they are all super excited to be there. The first date card is read and it’s with Emily. They scale the Bay Bridge and Emily, who is afraid of heights, has a panic attack but Ben soothes her with a kiss. Also during this date there is a telescope conveniently placed on the balcony at the Fairmont hotel where the rest of the women are staying, and the women can see Ben & Emily kissing from their view. One they reach the top, Ben continues kissing Emily with all the girls peeking in on their intimate moment. At dinner, Emily tells Ben that she has been trying online dating and they matched her up with her older brother. Ben tells her about his past relationships, he has had a few serious ones but they all didn’t pan out. Ben loves the way the relationship with he and Emily is going and gives her a rose, she is safe!

Meanwhile, the ladies receive another date card and this one is a group date card. Ben arrives for his date and eleven girls are ready, to go skiing? Ben closes down one of the streets in San Francisco, brings in fake snow and the eleven girls go skiing in 85 degree weather, in their bikinis.

Another date card arrives, with a box of jewellery, and this time it’s for Brittney but she seems disappointed that her name is on the card, she should be thrilled but she is torn and confused.

Ben is so naive, he is with the 11 girls and he thinks there is going to be no drama tonight alone with them, ya right! Rachel zones in on him for some alone time and she starts kissing him while the other girls are watching.  Kacie B. gets some alone time as well, which renews her confidence in her and Ben’s relationship.

Meanwhile, Brittney packs up and goes in search of Ben, who is with Blakely. She tells Ben that her heart is not in it and she doesn’t want him to waste a one-on-one date with her. Ben returns to the girls and gives out the rose to Rachel, making out with him obviously pays off.

A new date card arrives to replace the one that Brittney didn’t use and Lindzi is picked because as Ben says “her first impression made a lasting impression”. They take a trolley around town, go to a “Speak Easy” at a place called “Bourbon and Branch”, then head to a private concert at City Hall put on by Matt Nathanson.

At the cocktail party, Jennifer gets some alone time with Ben and he deems her the best kisser in the house. Before the rose ceremony at the Farimont hotel, Shawntel Newton, the mortician during Brad’s season, comes back to “enter” the game. Her reasoning for being on the show? Well, she wanted to date Ben. Essentially she tells Ben that she thinks there could be something between them, they live close to each other, and she’d like the chance to date him, but, she will leave it up to him by giving him a chance to think about it and decide at the rose ceremony if he wants to give her a rose.

Ben introduces Shawntel to all the other women and he hopes they are going to be gracious and welcoming. The women are in no way going to welcome her with open arms, they all gang up on her and basically want her to leave. Courtney is completely pissed and walks out and if Ben allows her to stay, she is prepared to leave and some of the other girls are having meltdowns.

Ben gives the first rose to Courtney who tells him off about “whats her butt” – she goes on to say that it was too much tonight but accepts the rose anyway. This is so weird, these women are actually having trouble breathing while they are waiting to receive a rose from Ben – is all that? One rose left, who will get it – no time to give it out yet, Erika faints. Meanwhile, Jaclyn is balling her eyes out and the impending doom.

Ben addresses the girls and tells them that he just can’t give out the final rose tonight, Erika Uhlig and Jaclyn Swartz are going home, along with Shawntel who never receives a rose from Ben after showing up uninvited.