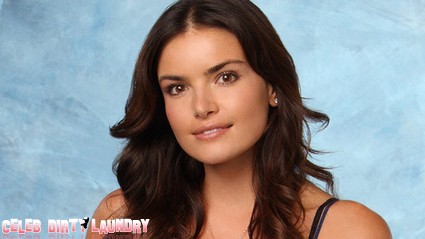 Courtney Robertson, the 28-year old model from Santa Monica, is no stranger to taking off her clothes.  On “The Bachelor”, we got to see Courtney strip down to her birthday suit to skinny dip with bachelor, Ben Flajnik and she took off her top on a group date with the other women.  Basically, Courtney has proven that she will do just about anything to be in the spotlight, including looking like the biggest slut in “The Bachelor” history.

Now, we all know that Ben is going to pick Courtney at the end, cause he isn’t thinking with his heart but with Mr. Happy and the relationship will never last. You might be wondering what will be next for Courtney, well she will able to win over lots of Mr. Happy’s if Vivid Entertainment has anything to say about it.

Reports surfaced that Courtney filmed a sex tape with an ex-boyfriend before going on The Bachelor and Vivid wants to get their hands on it and if they can’t get that, they are prepared to offer her $1 million to produce a new one! Here’s what Steven Hirsch, founder of Vivid had to say:

“There is no doubt that Courtney is the hottest girl on [the show],We would definitely like to buy an existing tape, or if she prefers, produce one with her. This tape could definitely be worth as much as $1 million”.

Vivid is no stranger to filming celebrity sex tapes, there was one starring Pamela Anderson and Tommy Lee and of course the infamous Kim Kardashian sex tape.

More: Courtney’s Ex Tells All – The Bachelor Ben Flajnik Is Being Tricked (Photo)

For now, you can see Courtney on “The Bachelor” this Monday night when she takes Ben home to her family. I wonder what mom and pop are going to think about the going nude and topless thing?