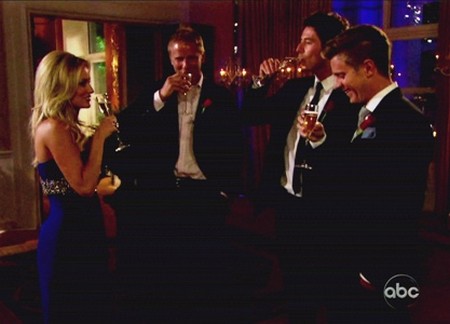 Are you invested in watching The Bachelorette this season? If so, are you pulling for race car driver, Arie Luyendyk Jr., to win Emily Maynard’s heart in the end?  Emily and Arie shared a fantasy date on this week’s episode and it was a date that, by all accounts would be considered fabulous.  Their day began on a catamaran in Curacao.  They sailed out to Fulk Bay where they were able to swim with a pod of dolphins.  Emily was a bit nervous to be in the water with these mammals but Arie was as reassuring and comforting as a guy could be. He convinced her (and me) that he wouldn’t let anything happen to her as they swam.

These two have had a dump truck load of chemistry from the very first date.  Emily and Arie are always lip locked when together and it’s clear that the physical part of their relationship is perhaps what comes the easiest.

I think the differences started to reveal themselves as they talked more.  Arie is a race car driver that hates to stay home and sleeps late.  Emily by nature is a homebody with her early rising daughter. It seems to me that maybe what Arie thinks looks great on paper with Emily would prove tedious in everyday life.  If it was just about them then they could definitely have a fun, playful relationship until the sparks fizzled.  But six year old Ricki is in the mix and Emily seems adamant about wanting to find a man ready to be a husband and father.

At the end of the date, Emily opted not to give Arie the Fantasy Date Card, because she didn’t trust herself alone with him for the night.  I’m going to bet she’ll be glad she made that decision in the end because Arie just doesn’t appear to be the best choice for her.

Did you watch the episode?  Do you think Arie is good for her and ready for a life with her and Ricki?  Tell us your thoughts in the comments below!