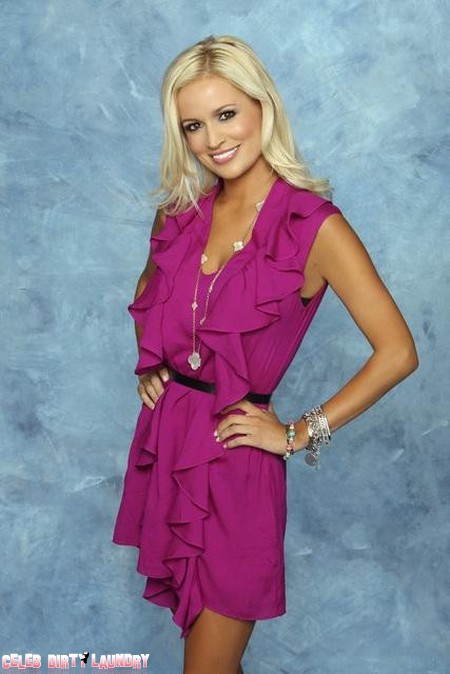 25-year old, Emily Maynard is the new star of The Bachelorette‘s eighth season. Emily is no stranger to the ABC franchise, she fell in love with Bachelor Brad Womack and won the final rose in season fifteen. Brad got down on bended knee and gave her a $90,000.00 ring (the most expensive in Bachelor history) and even though Emily said yes, the relationship didn’t last long with Brad blaming himself for the demise.

Emily’s personal story is one filed with triumph over tragedy. She lost her first fiancé, professional NASCAR racer Ricky Hendrick, in a plane crash, the two had been dating since they were 15 years old. Six months before Hendrick died, he proposed to Emily and just a few days after his death, Emily found out that she was pregnant with her daughter Ricky, who is now 6 years old.

Emily’s first priority has always been her daughter and that has not changed. In season eight Emily insisted that ABC move the entire production of the show to North Carolina in order to not disrupt Ricki’s home environment. Emily must have a lot of pull over at ABC because they granted her request and filming began last week.

Spoiler Alert!  Don’t read if you don’t want to know, but keep reading if you want to know which Bachelor returns, about the group dates,  seven of the men and who the are, the first casualty and more….

Surprise Bachelor Returns – Bentley Williams is going to return and be given the chance to repair his image. Remember him? He was a contestant on Ashley Hebert’s seventh season of The Bachelorette when she pulled him aside during a group date to discuss how former Bachelor villain, Michelle Money told her that Bentley was on on the show to promote himself and his business. Bentley reacted by leaving the show claiming that he missed his daughter too much to say. He later revealed that his exit was more because he was disappointed that in season seven Emily Maynard was not the new Bachelorette.

Group Dates – One of Emily’s dates will be at one of the hundreds of wineries in the Charlotte area, the only region on earth where you’ll find every major type of grape grown in the world. Another group date will be at the Booth Playhouse in uptown Charlotte in which all the proceeds will benefit the Levine Children’s Hospital, a place where Emily has done volunteer work in the past and the Muppets will be in attendance.

Teaser: Seven Of the Guys

2. Tony DeSarro, a Senior Associate at KPMG Forensic Technology Services in Georgia, he likes music and has even recorded a few songs.

3. Joel Gilson, a Medical Sales Rep for Stryker from Iowa, he has also played a lot of football.

5. Travis Pope, an Account Executive for the Clarion Ledger newspaper in Mississippi. He was previously engaged to Lauren Jones, CEO of Lauren Jones Footwear and she and Travis were pitching a reality show,“Chasin Dreams with Lauren and Travis” before they broke up.

First Casualty – Actor and model, Ben Smith was sent home hours before the guys met Emily. He was definitely there ready to be cast, but for whatever reason, he was let go and not even given a reason why.

Rumour has it that Emily’s season will premiere on May 14th, 2012 in her hometown of Charlotte, NC.  Don’t forget to come back to Celeb Dirty Laundry for all the official recaps, wrap ups and spoilers.