The Carrie Diaries Series Premiere is Coming to The CW this January! 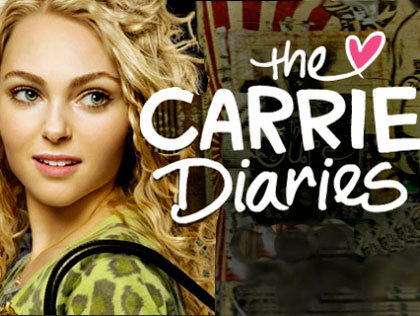 Admit it, if you’re a woman between the age of 15 and 45 not only do you still DVR Sex and the City reruns on the Style Network, but you probably own a season or two of the iconic series, right? Me too, and there’s nothing wrong with that! The Carrie Diaries is Candace Bushnell‘s glimpse into a young Carrie Bradshaw’s life, before she came to NYC in search of labels and love. The book was picked up by The CW and as most SATC fans know, it’s coming to our televisions pretty darn soon.

The Carrie Diaries is set in 1984 when Carrie is just 16 years old. Since their mother passed away, Carrie’s younger sister Dorritt is more rebellious than ever, and their father Tom is overwhelmed with the responsibility of suddenly having to care for two teenage girls on his own. Carrie’s friends — sweet, geeky Mouse, snarky Maggie and sensitive Walt — make life bearable, but a suburban life in Connecticut isn’t doing much to take her mind off her troubles. Even the arrival of a sexy new transfer student named Sebastian only reminds Carrie that she spent the whole summer grieving rather than moving on with life. So when Tom offers Carrie the chance to intern at a law firm in Manhattan, she leaps at the chance.  Carrie’s eyes are opened wide at the glamour and grit of New York City – and when she meets Larissa, the style editor for Interview magazine, she’s inspired by the club culture and unique individuals that make up Larissa’s world.

AnnaSophia Robb is the lucky actress to snag the much sought after role of Carrie and from the promo shots that are beginning to pop up, she’s a convincing looking Carrie!

While anxious viewer’s will have to wait a bit longer to get a weekly fix, The Carrie Diaries world premiere is this Monday night in Manhattan, as a part of the NY Television Festival.  Check back in as Celeb Dirty Laundry brings you the latest news on the show’s debut!

Are you excited to see Carrie Bradshaw back on your screen?  Will you be watching the CW’s series? Tell us your thoughts in the comments below! The Carrie Diaries will premiere this coming January on The CW.