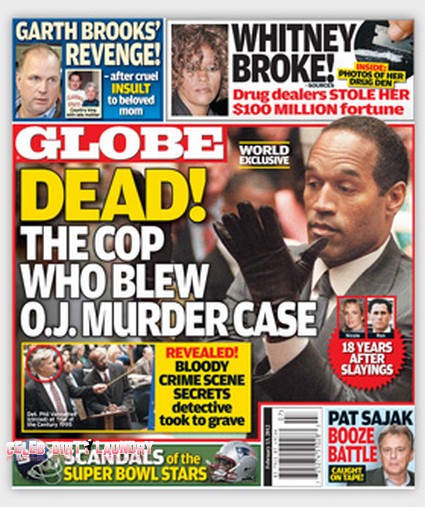 The current issue of Globe Magazine features the cover story ‘Dead – The Cop Who Blew O.J. Murder Case.’  The magazine claims that 18 years after the murders they have a World Exclusive of the bloody crime scene secrets that Detective Phillip Vannatter took to his grave.

The Los Angeles police detective served as a lead investigator in the 1994 murders of Nicole Brown Simpson and Ronald Goldman, died from complications due to Cancer in Southern California last week.

Defense lawyers took aim at Vannatter’s truthfulness, suggesting police set out to get Simpson as soon as his ex-wife was found slain.

Globe has more:   The death of the lead detective on the O.J. Simpson murder case has triggered a bombshell revelation – The Juice got off because the top cop blew the probe. Get the new GLOBE and learn the shocking snafus that let the football great walk free after the bloody slaughter of his ex-wife Nicole and her friend Ronald Goldman.

Meanwhile rumors have been circulating that O.J. Simpson who is serving hard time in prison is Khloe Kardashian’s father.  The Kardashian’s have denied the rumors.

Also included in this week’s issue Whitney Houston is broke!  Whitney blames the vulture drug dealers for preying on her during her hellish 20-year addiction. While her rep denies she’s penniless, sources say the songbird is now being supported by music industry heavy hitters.

To read all this and more, pick up the current issue of Globe Magazine!