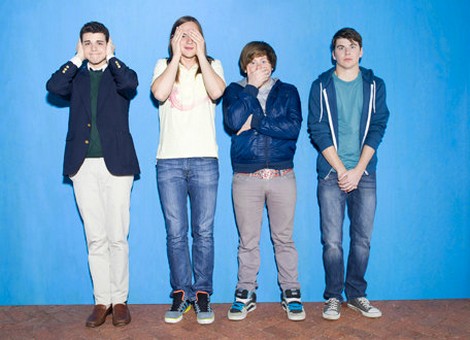 Tonight is an all new episode of MTV’s hit series The Inbetweeners.  On tonight’s show titled “The Masters” Will develops a crush for Charlotte after bonding over a game of imaginary chess.  If you missed last week’s episode called “Club Code” we have the full and detailed recap HERE for your enjoyment!

On last week’s episode the boys decided that a bowling alley was their best shot at getting served alcohol underage, so they payed a local patron to buy them beer. When that fails, they tagged along with Carly and her friends at a night club.  We got to see what a night out on the town meant for The Inbetweeners.

If you have never watched the show Will, Simon, Jay and Neil aren’t losers. They aren’t popular either. Not yet. They exist somewhere in the middle. Just four friends plotting a course through the awkward and often humiliating journey of being a teenager. Finding strength in their shared shortcomings… mostly by mocking each other. Because that’s what friends are for.

On tonight’s show Will tries to appeal to the interests of his dream girl while helping Simon with Carly; Jay quests after nocturnal emissions.

Tonight is going to be another fun episode that you won’t want to miss, so be sure to tune in for our live coverage of MTV’s “The Inbetweeners” tonight at 10:30PM PST! Meanwhile, while you wait for our recap hit the comments and let us know what you think of season 1 of “The Inbetweeners” so far! Check out the sneak peek video of tonight’s show below!

Tonight’s episode: This episode begins with the guys hanging out at lunch debating whether or not to find a new club to join. Simon thinks it’s a good idea to get his mind off of Carly and then realizes that Carly may like him more if he’s interested in something besides her. Will decides padding his high school resume with club activity will make him look good when he tries to run for political office years from now. As he sits in the school office seeking club info his dream girl walks in and for no apparent reason, they play a playfully, invisible game of chess.

Will decides to send dream girl (Charlotte) a friend request with the ulterior motive being to find out her interests. He wants to stalk her profile and then create a club that she’ll love. Cooking it is!  Word spreads fast and Carly approaches the guys all excited about the idea of cooking club and she asks Simon if he’ll join. Will realizes he has a chance to spend time with Charlotte while also helping Simon get together with Carly.

Will finally gets the nerve to tell Charlotte about his new club and he directs her to check out his profile on the social networking site to learn more about him. She reads and then he realizes that one of the guys changed his status to Charlotte’s name over and over again. She sees it and tweaks, telling him to back off.

It comes time for the clubs to rally support in front of the school. Simon decides to rap about cooking club and how yummy it is. Eventually the kids all clap along and the school band joins him. The kid can do no wrong and it irks Will to no end. He realizes he has completely blown it with Charlotte but is glad to see Simon still has a shot with Carly.  Well, kind of. Carly walks in with a jock named Bobby who cooks like a chef and Simon realizes that Carly has the hots for Bobby rather than him. Cooking club turns into a big, episode ending food fight.