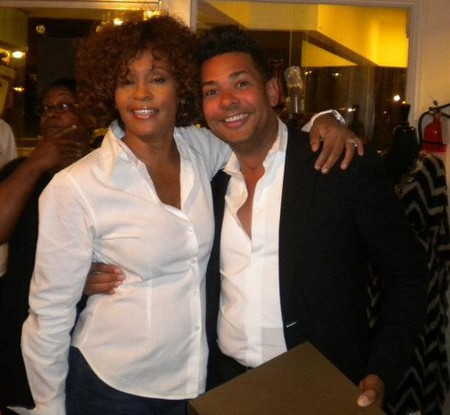 The man who almost certainly took the uncensored death photo of Whitney Houston in her coffin claims to be the dude who cleaned her hotel room of incriminating evidence in her death.  Raffles van Exel told the Dutch newspaper De Telegraaf that ‘the room had to be emptied, someone had to do it.’  The implication is that good old Raffles was there to remove whatever cocaine Whitney didn’t manage to take just before she died.

People in general and the stupid coroner in particular, say that there was no evidence of foul play in Whitney’s death.  What is the intentional removal of evidence from the site of a fatality if not foul play???

Raffles was hanging onto Whitney’s entourage both before and after she died.  Raffles attended two private viewings of Whitney’s casket with the family.  The Whigham Funeral Home say that is was Raffles who took the photo and they have an employee who claims that he saw him do it. Whighams say that they told the Houston family of their suspicions when the picture appeared on the cover of The National Enquirer but they didn’t do anything about it.

Celebuzz scooped it: A close confidante of the late pop diva Whitney Houston has admitted he cleaned up the hotel room where she drowned, Celebuzz has learned.  In an interview with respected Dutch newspaper The Telegraph on February 15, just four days after the singer’s death, Raffles van Exel confessed: “The room had to be emptied.”

“Someone had to do it,” van Exel told the newspaper, according to a translation of the article published online.   Van Exel stopped short of telling The Telegraph what exactly he removed from the suite and he has not returned Celebuzz’s request for comment.

Last week, the Los Angeles County Coroner’s Office declared Houston, 48, died from an accidental drowning in a hotel bathtub with the “effects of atherosclerotic heart disease and cocaine use.”

Sources tell Celebuzz that Beverly Hills police are still investigating how Houston acquired the drugs that contributed to her death and whether they were hidden from police and first responders.  No cocaine or drug paraphernalia were found in the suite at the Beverly Hilton Hotel in Beverly Hills, Calif., the source adds.

However, Houston’s cocaine use appeared to have occurred “in the time period just immediately prior to her collapse in the bathtub at the hotel,” Chief Coroner Craig Harvey said when he announced the findings of his report, last week.

“(Houston’s case) is still an open investigation for us… I can’t disclose any details about the investigation,” BHPD Lt. Mark Rosen told People on March 23.

This Raffles fellow seems to be all over and up to no good.  Shouldn’t the authorities think about talking to this dude?  What do you think?  Let us know in the comments section below.