The Queen Commands Prince William and Kate Middleton to Get Their Freak on: Make a Baby Now! 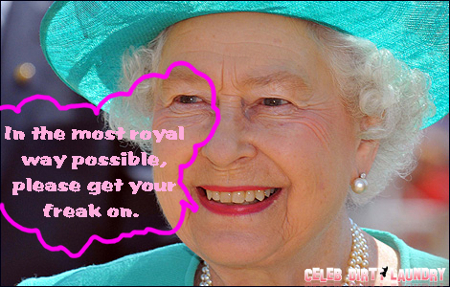 The Queen has recently made it extremely clear that she would like Prince William and Kate Middleton to make a baby now! It’s never too early to start manufacturing lil’ heirs and heiresses, and the Queen wants two of the hottest royals in the world to start gettin’ busy in bed and make family a top priority.

Apparently, the Queen told Kate that she needs to focus on family and later told Will that he shouldn’t “let Royal duties get in the way of a family and his happiness.”

Translation: make more royalty so we can continue to dominate the covers of People Magazine and US Weekly.

Kate Middleton, while still young and ready to bear children, is much older than her predecessors Princess Diana and Queen Elizabeth, both of who gave birth in their very early twenties. However, both Will and Kate recognize that, even if they’re a little late by Royal Family standards, they still have plenty of time to conceive. Not only do they have time, but they also have a plan. Which is a good thing!

According to sources (probably only the fanciest sources out there), Will and Kate already have some middle names picked out. If it’s a girl, the middle names will naturally be Elizabeth and Kate, and if it’s a boy . . . they’ll probably name it after me. Speaking of names, what should they name their first child? I’m thinking Beyonce would be a good name for their first girl. Beyonce Elizabeth Diana Windsor has a nice ring to it, no?

If you were given the power to name Prince Will and Kate’s baby, what would you bestow upon his (or her) lil’ royal life? Let us know in the comments section below and we’ll make sure Kate and Will receive your suggestions. Yes, our powers really do extend that far. They love us because we give them so much damn attention.