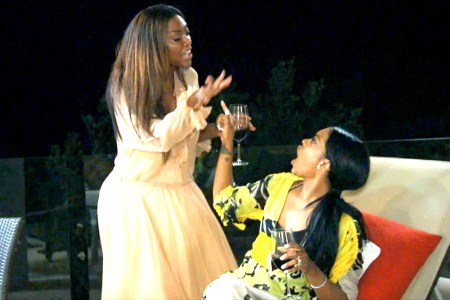 Tonight on Bravo is the season 5 sixth episode of THE REAL HOUSEWIVES OF ATLANTA and tonight’s episode is called “I Do…But, I Won’t.” On tonight’s show Porsha pushes one of the ladies to her boiling point, which results in a full-on feud.  Did you see last week’s show?  We did and we recapped it here for you.

On last week’s show as the ladies dealt with the aftermath of a blowout with Kim, Cynthia and Peter decided to move forward and invite another couple to fill Kim and Kroy’s place: Porsha and her NFL-star husband, Kordell Stewart. Once in Anguilla, the couples all froliced with their partners, but tensions flared when Kenya got flirtatious with someone other than her own man.

On tonight’s show Romance is in the air and a Housewife decides to say “I do” during this couples trip to Anguilla. While in paradise, NeNe begins to question Kenya’s behavior and her relationship with her boyfriend, Walter. This infuriates Kenya and puts her on the defense. Ultimately, it’s Porsha who pushes one of the ladies to her boiling point, which results in a full-on feud.

Tonight’s episode is going to be another drama packed one, which you won’t want to miss. So be sure to tune in for our live coverage of Bravos’ The Real Housewives of Atlanta Season 5 episode 7— tonight at 9PM EST! While you wait for our recap, hit the comments and let us know how excited you are about the new episode of RHOA tonight  and check out the sneak peek video below of tonight’s premiere!

Tonight’s recap:  This week the entire cast- men and all are still partying in Anguilla. Pheadra stopped short of tearing Kenya apart because this chick has a real obsession going with her husband, Apollo. Kenya brought her kinda sorta boyfriend Walter, but that isn’t preventing her from pawing at everyone else s’ husband! NeNe is smart and points out that Kenya’s relationship with Walter looks a bit fake.  Cynthia’s husband gathers all the guys off to the side at one point and clues them in to the fact that he fully intends to surprise Cynthia with the renewal of their vows while on the island.

Best (fake) scene ever. Walter pulls Kenya aside and tells her that Peter is surprising Cynthia with a renewal ceremony. Kenya gets all pouty because she wants to be the one with the proposal and when she heard rumblings of a wedding she had hoped that it would be hers and Walter’s. Cause that’s really going to happen

NeNe calls Kenya on her relationship with Walter and pretty much asks her if she’s faithful or the big hoe that she looks like. Kenya swears she has never (ever) cheated on any man. Sure.

Cynthia thinks that she needs to dress in white to meet the Prime Minister. She and the ladies travel together to the beach and once there are greeted by all the guys, also in white. Peter meets Cynthia at an alter by the ocean. He reminds her that they originally planned on getting married in Anguilla and so now he wanted to do it their way. The ceremony is simple and actually really beautiful. Peter got it right this time around. The only problem comes when they try to launch balloons that are lit. They’re supposed to make a wish before letting them go. Peter and Cynthia’s balloon crashes to the ground. Kandi sees this as a bad sign.

The ladies are all hanging out by the pool talking about their trip and Porsha steps to Kenya to hash out their ugly differences. Porsha finally calls Kenya an old lady beauty queen and Kenya loses it completely. Pheadra says she feels like she’s in the middle of Hurricane Katrina as Porsha calls Kenya on her acting like a whore with everyone elses’ husband while her fake boyfriend looks on. Actually, I’m sorry, she called her a “low class whore’ right before NeNe restrained Kenya and backed her away.

The rest of the ladies are watching and snickering because truthfully, Porsha is speaking for all of them. Kenya admits that she is ghetto. But she’s also sophisticated, classy and educated. At that Kenya starts doing model poses by calling herself fabulous. This mess isn’t over. Tune in next week for Round Two of Porsha vs. Kenya.