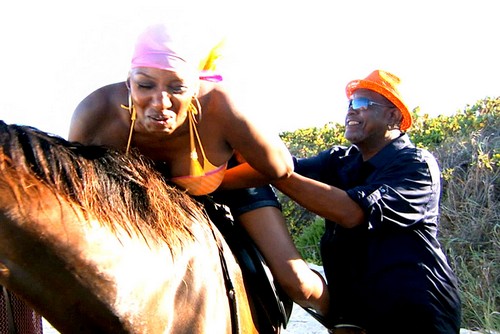 Tonight on Bravo is the season 5 eighth episode of THE REAL HOUSEWIVES OF ATLANTA and tonight’s episode is called “Fools of Engagement.” On tonight’s show As the Anguilla trip comes to an end, there’s still plenty of unfinished business… at least in Kenya’s mind! Kenya hopes to leave the island with an engagement ring, yet her constant questioning of Walter makes him reconsider proposing to her.  Did you see last week’s show?  We did and we recapped it here for you.

On last week’s show Romance was in the air and a Housewife decided to say “I do” during this couples trip to Anguilla. While in paradise, NeNe began to question Kenya’s behavior and her relationship with her boyfriend, Walter. This infuriated Kenya and put her on the defense. Ultimately, it was Porsha who pushed one of the ladies to her boiling point, which resulted in a full-on feud.

On tonight’s show as the Anguilla trip comes to an end, there is still plenty of unfinished business to be addressed. Kenya hopes to leave the island with at least an engagement ring, while NeNe focuses on squashing her bumpy past with Kandi. Cynthia works to clear the air with Kenya, but Porsha keeps her guard up in case Miss USA decides to come for her again. Tensions rise at the final vacation dinner when one couple gets thrown into the hot seat.

Tonight’s episode is going to be another drama packed one, which you won’t want to miss. So be sure to tune in for our live coverage of Bravos’ The Real Housewives of Atlanta Season 5 episode 8— tonight at 9PM EST! While you wait for our recap, hit the comments and let us know how excited you are about the new episode of RHOA tonight  and check out the sneak peek video below of tonight’s premiere!

Tonight’s recap: Oh my. If you saw last week’s episode then you had to have been as amused as I was. Kenya got into a nifty fight with Porsha and ended up calling herself, “Fabulous. Gone with the wind fabulous.” Insert major laughter here. Kenya is mad because she was called a tramp but maybe if she wasn’t grinding on everyone else s’ husband the word wouldn’t have been spoken.  Kenya goes off to vent to Walter about how she’s no tramp and she has blazed the trail for all these women. This chick makes it hard to like her even for a second.

Nene hunts down Kandi and demonstrates the whole Gone With the Wind scene that played out with Kenya and of course they collapse into a pile of giggles. They also make up for any and all trouble that has ever been between them. Porsha also talks to her husband about what went down to give him a heads up.

The couples are all about to head off together for a day on the beach and so Kenya feels like she needs to apologize to Porsha of course that apology comes with a backhanded slap. Another round is coming, hold onto your seats. Kenya then tries to kinda sorta befriend Cynthia by giving her a copy of Vanessa Williams new book. Apparently Kenya thinks Cynthia needs help even though she was raised in the world of pageants and modeling.

Of course this also turns into a fight. Cynthia hates Kenya’s attempts at bossing her around.

It’s the last night on the island and Walter looks pretty fed up with Kenya and her drama. I think the rest of the gang is wondering if he’ll propose or not. Peter stands up at the table and basically corners Walter on whether or not he and Kenya are a real couple. Walter stands up and says they have discussed it but he has no plan of popping the question.

Porsha jumps into the conversation and says she never wanted a man that she had to pressure, unlike Kenya who eventually leaves the table. Everyone sat discussing how they were proposed to and she just couldn’t take it. Walter goes after her and tries to put it simply, he isn’t letting anyone pressure him into marriage. He already has one divorce under his belt and he’s not making a second mistake. Kenya leaves in tears.

Phaedra finds Kenya crying on the beach and tries to calm her down. Tune in next week to see if Walter and Kenya work things out or if Kenya is really destined to be an old maid.