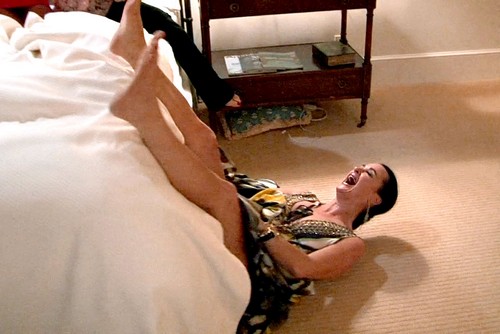 THE REAL HOUSEWIVES OF BEVERLY HILLS returns to Bravo tonight with a whole new episode called “Girls Gone Ojai’ld.” On tonight’s episode Still in Ojai, things between Brandi and Taylor have only just begun. Brandi announces her new book deal about the divorce with her husband and the Housewives don’t hold back their feelings. Did you watch last week’s show? We did and we recapped it here for you!

On last week’s show Lisa and Adrienne’s tense summit meeting came to a head, and one party is left unsatisfied when the other refused to apologize for things she’s said in the past. But problems were set aside temporarily when Kim suggested a group trip to Ojai, California, where the women share a five-bedroom mansion on gorgeous grounds. Kim and Brandi started to forge an unlikely bond, but when Brandi is unable to control her potty mouth, things go south with Adrienne.

On tonight’s show Still in Ojai, the women have a hard time understanding Lisa’s defense of Brandi’s language at the dinner table. Brandi and Taylor exchange angry words as well, but the group lightens up the following day, having fun in a golf cart race, at a mud-filled spa and, late at night, in a drunken gymnastics and arm-wrestling contest that is the opposite of ladylike. However, the problems between Brandi and Adrienne have just begun.

Tonight’s episode is going to be filled with the usual Housewife drama and you won’t want to miss it, so be sure to tune in for our live coverage of the show tonight at 9 PM EST! While you wait for our recap hit the comments and let us know how excited you are for the premiere of “The Real Housewives of Beverly Hills” season 3! Also we have a sneak peek video of tonight’s show below!

I’m really thinking that we need to change the name of this show The Real Bitches of Beverly Hills!  The first ten minutes of tonight’s episode has been a long dragged out dinner table cat fight between the entire cast of ladies. After being at war all last season, Brandi and Kim are actually taking steps towards mending fences. Brandi actually offers up what I tend to think is a sincere-ish apology for calling Kim on her bathroom drug abuse (okay she got it wrong, Kim was admittedly hitting the bottle hard not pill popping) last season.

Kim starts to drop a couple tears and Adrienne from the opposite end of the table notices that Kim is crying and repeatedly informs everyone else until Brandi tells her point blank to “Shut the f*** up!”.  Well, oh my god you’d think that rather than drop an F-bomb Brandi had instead slit someones’ throat because these chicks are all appalled at her cursing at dinner. Kim flees to the ladies room with Brandi in tow and while there the two seem to really make amends. Brandi ends up hugging the woman she insulted in the past.

THIS should be a moment that everyone notes but instead they are all catty about the F-bomb. Even Kyle, who should have been thrilled to see Brandi apologize to her sister is more hung up on the table language. Eventually Brandi apologizes for her mouth but is still glad that she told Adrienne to shut it. Once that fight ends Brandi tells the ladies she has landed a book deal and they is the next bitter pill. These women just can’t be happy for the success of another. Taylor especially tears into Brandi because at one point in the past Brandi  insulted Taylor’s book deal. There is no joy at this table.

The next morning Lisa and Brandi have a nifty chat- again about the language. At least Lisa is totally on Brandi’s side partly because Brandi was right and a little more because she currently hates Adrienne and wishes her house would burn down. Or something. The crew ends up attempting to play badminton, in dresses of course. I guess that’s how they do it in Beverly Hills?

No vacation is complete without spa treatments so after an invigorating afternoon of badminton this crew is off for mud baths. Actually they are all getting along and play in the sauna to let off steam, or something.

It’s the last night for the housewives at their Ohi hotel and once again they’re going to try and sit down and have yet another dinner. It starts off a bit odd, but at least it’s civil. Some how birth stories come up and Brandi goes down the table finding out who delivered their babies vaginally vs. who had a c-section.  They make it through dinner mostly drunk, with the exception of Yolanda who is not drinking for three months. She’s doing some sort of holistic treatment for bank pain and booze is not allowed.

I’ve learned something tonight. When Brandi gets drunk she kisses and arm wrestles her cast mates. She and Taylor hate each other but planted a smackeroo on each others lips before Taylor took her down. Then the gymnastics competition started. No really I’m talking back flips and of course Kyle looks for any opportunity to drop it like its hot and do a split so here was her big chance.

I’ve learned something else- Yolanda is really uptight and boring. She tells the ladies the next morning that she hates drunk women because they are so unclassy.  I suspect Yolanda won’t be signing on for a second season of this show!

This episode started with a bang but it has wound down with a wimper. Tune in next week to see what happens next. I have a feeling it won’t be long before the ladies all jump all over Yolanda for her pretentiousness!