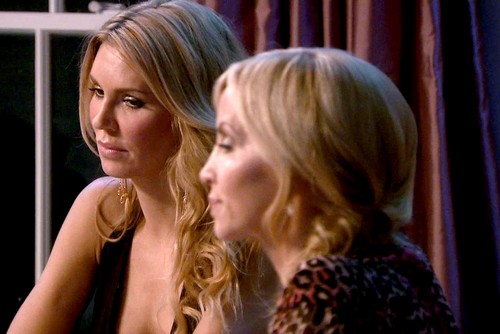 THE REAL HOUSEWIVES OF BEVERLY HILLS returns to Bravo tonight with a whole new episode called “Oy, Faye!” On tonight’s episode The fallout from Brandi’s revelation about Adrienne continues, and it is only getting uglier. Mauricio is angry the whole fiasco happened at his event and he doesn’t want Brandi to come to Kyle’s upcoming dinner party, but it’s too late; she’s already invited! At the party, Kyle’s friend Faye demands to know why Brandi said what she did, and won’t accept an explanation until Brandi departs in tears. Did you watch last week’s show? We did and we recapped it here for you!

On last week’s show though Kyle surprised her daughter with a present every 16-year-old would want, the happy times in Beverly Hills didn’t last for long. Lisa had a food tasting at one of her restaurants, but Brandi feared she’ll run into the waitress who had an affair with her ex-husband. At the tasting, when asked about her issues with Adrienne, Brandi revealed very personal information that Adrienne had always kept private. When Kim told Adrienne what Brandi revealed, Paul and Adrienne were livid — and a battle of epic proportions began.

On tonight’s show Kim, though newly out of rehab, plans a trip to Vegas for her son’s 21st birthday — and neglects to invite Kyle. Meanwhile, the fallout from Brandi’s revelation about Adrienne continues, and it is not pretty. Angry that this happened at an event of his, Mauricio doesn’t want Brandi to come to Kyle’s upcoming dinner party, but it’s too late; she’s already invited. At the party, Kyle’s friend Faye demands to know why Brandi said what she did, and won’t accept an explanation until Brandi departs in tears.

The war of words between Brandi and Adrienne wages on this week. Supposedly Brandi outed Adrienne’s secret that they have yet to divulge (but if you’ve read any of the gossip then you can assume it’s that ditty about Adrienne faking her pregnancies and letting a surrogate carry her kids so she wouldn’t get fat) on air, but we all know the gist by now.  Kim told Adrienne and her then-husband Paul what was said about them and she let them know smack in the middle of Mauricio’s work party.  According to Brandi all of these women know the truth but it’s one of the many secrets that they keep under lock and key.

The ladies are all breaking off into little groups and rehashing the public screaming match between Adrienne and Brandi. They all agree that Kim was wrong for dropping the grenade at this party and of course Taylor tries to tie it all in to the horrible wrongs that she feels she suffered at the hands of this crew last year. Have another drink Taylor, you make more sense then.  BTW, Kim insists that it’s actually Kyle’s  fault that she blabbed at the party. At one point Kyle asked Brandi for details so in Kim’s mind that lit the match for the whole explosion.

Mauricio sits down with Kyle and explains to her that he has truly had more than enough of her sister. Kyle has yet another party coming and she thinks the two feuding women can exist in the same place without another round. Sure.

Yolanda believes exercise is the fountain of youth so she clearly pushes it to the extreme. She envies her daughters perfect butt and hips and lips. You get the idea. She has a 57 year old trainer that looks much younger- but she prefers the old guy so that her out of shape husband isn’t intimidated!

Lisa has a long chat with Brandi about what it’s like to be on Adrienne’s bad side. Brandi swears she can make everything much uglier if she needs too and I’m not doubting her.

Kyle welcomes all of the ladies into her home for dinner. Well all of them minus Adrienne who passed on the chance to break bread with Brandi and Lisa, her two biggest enemies. At dinner in Kyle’s brand spankin new dining room the ladies grill Brandi on what the real beef is between her and Adrienne. Faye Resnick is Kyle’s bestie and so she decides it’s her business to be relentless on Brandi and it’s starting to really grate on her nerves. Then again, doesn’t Faye grate everyone’s nerves? She seems to think that stripping down for Playboy a few decades ago makes her the voice of reason at any dinner party these women throw. Faye just keeps coming at Brandi about the way she lives her life, accept that Faye doesn’t even know her. Brandi tells her she’s looking for attention and you better believe this is going to get ugly on the next episode!