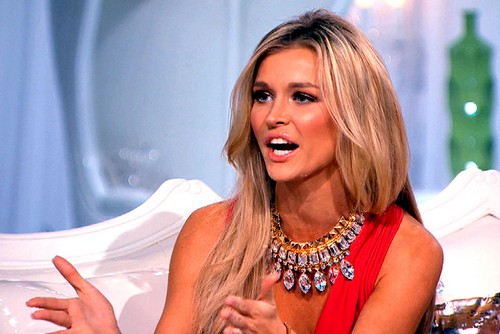 Tonight on Bravo a whole new episode of THE REAL HOUSEWIVES OF MIAMI airs called “Reunion Part 1.” On tonight’s show Bravo’s Andy Cohen hosts a special reunion for the ladies of Miami to rehash this season’s drama. Anything is fair game when Andy is asking the questions.  Did you see last week’s episode? We did and we recapped it for you!

On last week’s episode stormy conditions were keeping the ladies stuck together on Bimini, but the women tried to find some peace and discovered that perhaps the island had healing elements after all. When they finally make it back to Miami they returned with new found focus and profound motivation to better their lives. Relationships were on the chopping block and it was the moment of truth for all of those with burdens weighing them down.

Tonight’s episode is going to be filled with the usual Housewife drama and you won’t want to miss it, so be sure to tune in for our live coverage of the show tonight at 9 PM EST! While you wait for our recap hit the comments and let us know what you think of “The Real Housewives of Miami” season 2 so far! Also we have a sneak peek video of “Healing Hole” below!

Tonight’s recap: Tonight’s the night, part one of the reunion of The Real Housewive’s of Miami.  It gets ugly less than five minutes in. They do a segment on Joanna and her boyfriend Romaine but somehow it turns into a pissing match between Joanna and Adriana.  Ever since Adriana decked Joanna things between them have been bad and this fight is epic. I still can’t stand Joanna and her crocodile tears. Her man cheated, refuses to have sex with her and ignores her because she is an angry drunk. None of that has anything to do with Adriana!

Both Lisa and Leah are accused of not being good friends because they try not to have to take sides with the women. Leah insists she backs whomever she thinks has it right in the moment.

Another couple that got a lot of airtime was Karent and Rudolfo.  He is another cheating dog and at the end of the season Karent was all smiley while being told he was screwing a Spanish actress. Karent also smiled while grilling him about it and smiled while declaring her undying love and trust for him.  Thankfully Karent stopped drinking the Koolaide and has since dumped Rudolfo on his finely toned ass. She has also forged a friendship with Leah that for reasons I can’t grasp, pisses Ana off.  They go at it big time and when Leah stands up to Ana’s insults (which seem to come out of left field), Ana tells her to sit down so that she doesn’t break a hip.

Marysol is next to take shots at Leah. She feels like Leah has taken low shots at her all season and tried to ruin her business. Of course Ana sides with Marysol because it’s pretty clear that on this particular night she will side with anyone directly opposing Leah.

I wondered if the show was going to even acknowledge Joanna’s clear cut drinking problem and as luck would have it, they are. She admits she gets out of control when she’s partying but she doesn’t seem to grasp the fact that no one wants to deal with the sloppy overly emotional girl.

This reunion show is pretty pathetic. Every attempt to discuss anything ends up in a shouting match with people cussing each other out. On top of that, none of the garbage they are fighting over even matters. They are all (minus Lisa and Karent) taking turns being evil and they all pretty much have an ax to grind. You would think that they were fighting over something serious and instead they are fighting over who is nice.

In case this hour wasn’t torture enough there’s another one next week!