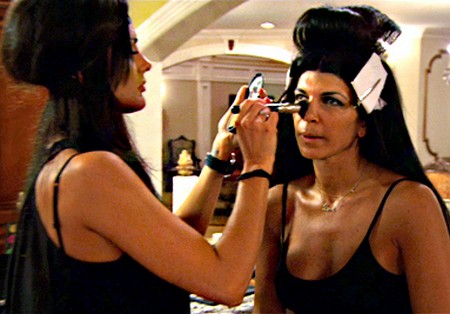 Tonight on Bravo is an all new episode of the Real Housewives of New Jersey called ‘The Jersey Side.’ On tonight’s show one of summer’s hottest concerts arrives, and Melissa Gorga faces her toughest on-stage competition yet….from Gia! If you missed last week’s show called “Temporary Shrinkage” there is a full and detailed recap HERE for you!

The last time we saw our Housewives Melissa and Joe threw Antonia a lavish birthday party, bringing Teresa and Jacqueline face-to-face for the first time since their blowout. New relationships blossomed as Kathy’s sister Rosie invited her new girlfriend to meet the family, and Caroline’s son Albie introduced his cheerleader girlfriend to their family as well.

On tonight’s show Everyone is putting on a show in New Jersey! Melissa polishes up her act with Chris Judd, but it’s Teresa’s daughter, Gia, who threatens to upstage her at the live music festival. Jacqueline’s husband, Chris, hits the road with Caroline’s sons, Albie and Chris, to sell their BLK water at the Fancy Food Festival in Washington DC, but things go awry when a night of drinking threatens to damage their presentation.

One of summer’s hottest concerts arrives, and Melissa Gorga faces her toughest on-stage competition yet….from Gia!  Meanwhile, Jacqueline’s husband, Chris, and Caroline’s sons, go on a work-related road-trip that goes from professional to chaotic after a night of drinking gone wrong.

Tonight’s episode is going to be filled with the usual Housewife drama and you won’t want to miss it, so be sure to tune in for our live coverage of the show tonight at 10 PM EST! While you wait for our recap hit the comments and let us know what you think of “The Real Housewives of New Jersey” season 4 so far! Also we have a sneak peek video of tonight’s episode “The Jersey Side” below!

And here we go with the Live Recap!

Tonight’s episode begins with both Melissa and Teresa’s daughter Gia in separate dance rehearsals for a music festival called Beatstock. Melissa has a bunch of b-boys and is being trained by Cris Judd (once married to J-Lo and choreographer to Michael Jackson). She is about to drop a single and admits she’s not the best singer but is really looking forward to performing. Gia meanwhile, is clearly a little dynamo and stage mother Teresa is right nearby cheering her on.

Caroline’s kids are working really hard to push BLK to a bigger market. They are heading to The Fancy Food Show where they’ll have a booth that they pray stays busy. Chris, Caroline’s husband is stressing about BLK and the risk that it is to his business and finances. He is driving a van full of young guys that are involved in the BLK business and it’s like listening to a bus filled with high school seniors.

As Melissa and Gia’s performance days arrives they are both nervous.  Melissa is also celebrating her seventh wedding anniversary so she wants to make her husband extra proud.  Teresa rents a limo to drive the family to Beatstock.  While driving her kids all make fun of Melissa saying that she smells and mocking her singing. Joe Giudice is happy to see his girls make fun of her.

Jacqueline is no longer friends with Teresa and alludes to the fact that while Teresa and Joe pretend to be tight, in private they lead separate lives.

Melissa and Teresa are working on their relationship and they seem to be really getting along.  They stand together watching Gia perform and the girl can dance. Melissa also gets more nervous about her own performance abilities as she takes the stage after her niece.  She takes the stage and really holds her own.  Teresa comments on how happy she was to support her.

Meanwhile the BLK crew is discussing Albie and his new girlfriend, Lindsay.  Albie himself says business will always come before a girlfriend.  That makes Caroline happy but I wonder if he’ll feel the same way in ten years.

Teresa and Melissa are planning their roadtrip to Napa  The whole crew is renting an RV to spend five days drinking wine while trying to maneuver the winding roads.  Basically the only one even on speaking terms with Teresa is Melissa, so this is going to get ugly and probably pretty quickly.  Tune in next week to see how this ill fated trip begins.