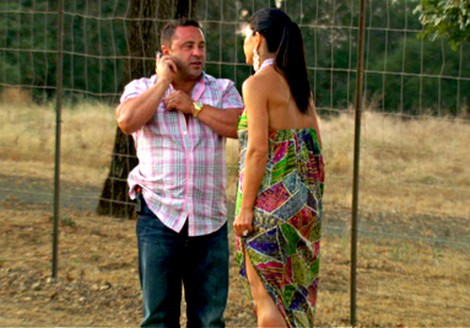 Tonight on Bravo is an all new episode of the Real Housewives of New Jersey called “Whine County”. On tonight’s episode The housewives and husbands arrive at a breathtakingly beautiful wine vineyard, where Caroline gets the surprise of a lifetime from her kids. Later, Caroline and Kathy question Jacqueline’s recent “reconciliation” with Teresa. If you missed last week’s show called “If This RV is a Rockin” there is a full and detailed recap HERE for you!

On last week’s episode Jacqueline and Teresa tried to see if their friendship could survive, meanwhile Caroline worried for her daughter Lauren, as she reached her boiling point. Also Caroline’s son, Albie, shared some breaking news regarding the state of his relationship with his girlfriend.

On tonight’s episode the great Jersey caravan stomps its way through Napa for a business meeting with a local vineyard. But all work and no play make the Housewives dull gals, and too much horseplay threatens to ruin the deal for good. And in a shocking moment of truth, one phone call could change Teresa’s life forever.

Caroline and Kathy question Jacqueline’s recent “reconciliation” with Teresa. Is their mended friendship going in the right direction, or causing Jacqueline more harm than good…

Tonight’s episode is going to be filled with the usual Housewife drama and you won’t want to miss it, so be sure to tune in for our live coverage of the show tonight at 10 PM EST! While you wait for our recap hit the comments and let us know what you think of “The Real Housewives of New Jersey” season 4 so far! Also we have a sneak peek video of tonight’s episode “Whine County” below!

We start off tonight’s episode learning that if Joe Giudice doesn’t get “hanky panky” once a day he’s miserable — or so says his crazy wife Teresa.  Melissa also tries to explain to Teresa that if she talks to all of the magazines about everyone then it’s unrealistic to think that people won’t be mad at her.  Melissa is choosing to believe that this time is different and maybe Teresa has learned her lesson the hard way.  Meanwhile in a different RV Lauren and Jacqueline are discussing how Teresa never learns and she is simply there for everyone’s enjoyment.  Caroline is completely finished with Teresa and all that drama that goes with being her friend.

The gang is out of the RV and now checked into a vineyard estate.  As Chris puts it, once they all start drinking the comments will start to spew.  This part of the trip is business and Chris takes that very seriously. He is expecting great behavior which we all know isn’t going to happen.

One of the big surprises of the trip is a birthday celebration for Caroline overlooking the vineyard.  She’s never a fan of surprises, but I’m buying how happy this one has made her. Lauren gives a speech about how important her mom is and how she misses her whenever they’re apart. Teresa even tears up and wishes that once they return toJersey, maybe she and Caroline can be more than cordial acquaintances.

They start taking group pictures and Joe G. steps away to take a phone call, which is clearly from another woman.  Teresa gets up to get him and he tells the woman that his “bi**h wife” is coming and then drops several more insults about his wife. When Teresa asks what he’s doing he insults her and curses her out. Her reaction makes it clear that she’s used to being treated this way.  Caroline predicted a few weeks ago that Teresa will leave Joe and after this caught-on-video moment, I don’t think anyone would disagree!

Teresa, needing attention drags Joe into the vineyard and all but begs for a quickie. The quote of the night comes from Kathy’s husband, “If he doesn’t want you in the bedroom he sure doesn’t want to do you on gravel!”  The rest of the cast watches at a distance in horror and then tries to play stupid when the two return to the table. This whole scene has to make Teresa cringe now.

Everyone sits down to one final dinner together that begins with a few awkward toasts. Teresa announces the few people that she was happy to spend time with and overlooks half the table.  Caroline wants to get up and leave because she thinks Teresa was deliberate and disgraceful.  We’ll have to wait until next week to see the fallout that is coming in spades in the next episode!