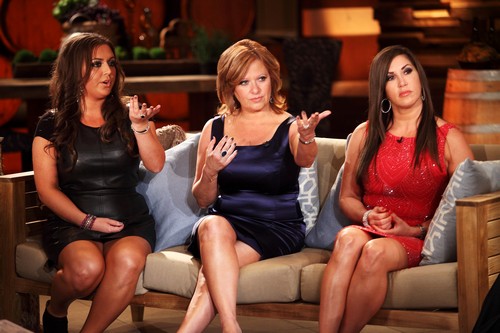 Tonight on Bravo is the Reunion Show of Real Housewives of New Jersey called “Reunion Part 1.” This week kicks of a three part (yes, three!) Jersey reunion, placing the wives on one stage after a full year of separation.

The emotional first installment starts off with tears and aggressive finger-pointing, bringing the insults from both sides to a whole new low. Jersey remains classy as ever, as Teresa continues to stands her ground that she did nothing wrong with her involvement in Melisa’s ‘strippergate.’ But at the same time, doesn’t hesitate to accuse her haters (specifically Caroline) of being a blubbery old hag. Will any wounds be healed, or will the reunion continue to open up new drama?

On last week’s show Melissa prepared to confront her past as questions about Teresa’s involvement in the stripper-gate arose among the ladies. A distressing phone call from Melissa sent Joe Gorga and Rich Wakile to her rescue and tensions hit a boiling point when they were greeted by the high priestess of Posche, Kim D. Teresa and Jacqueline’s friendship is put to the final test and in a shocking moment of truth Joe Gorga decided on the fate of his relationship with his sister. If you missed the episode you can read our full and detailed recap here!

On tonight’s show hosted by Bravo’s Andy Cohen, Part 1 brings Caroline Manzo, Jacqueline Laurita, Teresa Giudice, Melissa Gorga, and Kathy Wakile to discuss some of the most talked about antics of the season. Lauren Manzo joins the group to weigh in on her stunning transformation and the season’s drama.

Tonight’s episode is going to be filled with more Housewife drama that you won’t want to miss, so be sure to tune in for our live coverage of the show tonight at 10 PM EST! While you wait for our recap hit the comments and let us know what you thought of “The Real Housewives of New Jersey” season 4! Also we have a sneak peek video of tonight’s episode “Episode 21: Reunion Part 1” below!

Ready to rumble?  After weeks of drama, angst and of course, strippergate it’s the beginning of the end for season 4 of The Real Housewives of New Jersey. Part one of the reunion starts right about now. Let the Teresa Giudice massacre begin!

The girls are all together at The Borgata in Atlantic City and Andy Cohen gives a bit of back story that makes a bit of sense. Season four stopped filming the night before the season three reunion taped. Jacqueline Laurito was a no-show at the reunion because she was devastated by the whole strippergate mess. During that reunion the ladies alluded to the mess that was filmed the night before and tempers were seriously flaring.

This year, Jacqueline shows up with bells on. It is amazing to see this usually calm, kind of mousy woman in action tonight because she is relentless in her attack on Teresa. Actually 3 minutes in they all are. Teresa is stupid enough to blame Jacqueline for ruining her family when anyone that so much as clicks her name on a trending topic knows that Tre is a master at crushing those she claims to love. So if you’re keeping track, Jacqueline ruined Tre’s family and Melissa only attended Tre’s kids’ birthday party to get publicity. If you remember, they need her for that because she’s the star of the show- unquote.

Oh my god this turns into a total sh*t show when it comes to Jacqueline’s son, Nicholas. He’s 3 and was recently diagnosed with autism. They show a montage of him and it ends with him saying “I love you.”. Jacqueline dissolves into tears, causing Caroline Manzo to bawl like a baby while explaining that Nick has regressed and no longer speaks. Teresa being an attention seeking b*tch attempts to turn even this into something about her. She knew nothing because Jacqueline won’t speak to her but she loves Nicholas and was there when he was born…EVERYONE tells her to shut up because this has nothing to do with her. Caroline says, “You over there in your Christmas pageant dress, shut the F up.” Tre looks like Satan and simply calls Caroline an old hag. They DO manage to shut her up but you can bet THAT segment will be replayed everywhere tomorrow because it shows Tre’s need for non-stop attention.

Jacqueline also drops the bomb that after she and Teresa mended fences, Teresa immediately went to talk to Melissa and Jacqueline overheard her telling Melissa how much she hated Jacqueline.  Teresa, as expected denied everything even though Melissa explains the context of the whole conversation. Tre says it didn’t happen and they are trying to set her up. To hear her tell it, Tre spends her entire life dodging set-ups!

Lauren Manzo is introduced after losing 35 pounds. Tre starts in on her for getting a lap band and Lauren hits back, maybe harder than anyone else will tonight. She asks Tre how to spell “Napalm”. It’s a word Teresa uses pretty often on her blog (that she claims to write) yet she can neither define nor spell it. Teresa’s face is absolutely hilarious as you can see her struggling to figure out what it might mean!

After 45 minutes of combat Teresa decides that they’re all jealous and just want to be her. Oh sure. They all want a cheating husband that is jailhouse bound, disrespectful kids and money issues bigger than you or I can imagine. Now it’s Kathy Wakile’s turn to throw her hat into the ring. Teresa writes her off instantly and and says “You’re ugly and a piece of sh*t” That sends Rosie, Kathy’s sister who is backstage into a complete rage. Tonight’s episode wraps with Rosie screaming threats as crew members try to keep her contained.

Oh my hell. It’s a good thing these ladies are in a theater with nothing nearby that could possible be used as a weapon. I’ve watched the whole season and even I didn’t think it would ever be this bad on camera. Tune in next week for part two – when the truth about Joe Giudice banging other chicks comes out courtesy of Jacqueline!

Be Here For The Live Recap Of The Next Installment Of The Reunion Show!