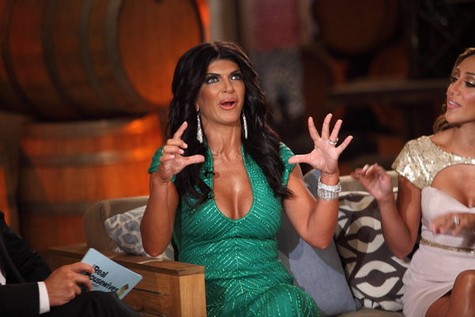 Tonight on Bravo is the continuation of the Reunion Show of The Real Housewives of New Jersey called “Reunion Part 2.” This week kicks of the second part of the RHONJ reunion, placing the wives on one stage after a full year of separation again. On tonight’s show the reunion picks up right where Rosie left off, after eloquently declaring, “….I’ll rip her head off!” While it doesn’t appear any heads were literally ripped from their skulls, Joe Giudice joins Teresa in the hot seat for the second installment of the reunion, and the ladies hold nothing back.  Did you see the first part of the reunion show?  We did and we recapped it here for you.

On last week’s show Caroline Manzo, Jacqueline Laurita, Teresa Giudice, Melissa Gorga, and Kathy Wakile reunited to discuss some of the most talked about antics of the season. Lauren Manzo joined the group to weigh in on her stunning transformation and the season’s drama.

The reunion show part one was the #1 unscripted cable entertainment telecast of the week and pulled in 5.8 million total viewers, for the night (9/30/12), across all plays, according to Nielsen. The 10PM premiere telecast garnered the highest rated episode of the season with 3.5 million total viewers and 2.1 million adults 18-49, marking season-over-season growth.

Tonight’s episode is going to be filled with tons more Housewife drama that you won’t want to miss, so be sure to tune in for our live coverage of the show tonight at 10 PM EST! While you wait for our recap hit the comments and let us know what you thought of “The Real Housewives of New Jersey” season 4! Also we have a sneak peek video of tonight’s episode “Episode 2: Reunion Part 2” below!

Oh my hell. The show begins with screaming and I’m betting it’s going to end the same. Caroline Manzo tells Teresa Giudice that this is her 15 minutes of fame and that when it’s over she’ll be alone. Teresa says she’ll have her family, which is pretty funny because her family is sitting on the stage shaking their heads no! Melissa Gorga tells her that they will not allow her to sit there and play the victim any more. They are finished letting her turn things into a big pity party.

Andy changes gears for a minute and talks to Rosie, Kathy Wakile’s gay sister who stepped out of the closet on camera this season.  Teresa tried to say that Kathy didn’t accept Rosie  and Rosie wants to be clear on this, Kathy knew that Rosie was on a bad path and disapproved of that, not her. Teresa is of course trying to say that she accepted Rosie long before Kathy did.

Caroline tells the crew that she didn’t have a good time on the Napa trip. The producers  flash back to all of the Caroline vs. Teresa moments from this season, especially the Napa trip which ended horribly. Caroline actually tries in vain to get through to Teresa, to make her see how bad her behavior is. Teresa calls Caroline a bully and claims she bullied her all season. Caroline wants one example of how she bullied her and Teresa can’t come up with one. She just keeps saying, ‘A lot of things.” But can’t give an example of how she bullied her. Caroline reminds Teresa of how nice she was to her when news of the bankruptcy first broke. Caroline admits that she later apologized to both Melissa and Kathy for badmouthing them. She went based on Teresa’s words and then met them and realized that they weren’t the devil after all.  Teresa never caves in. She never admits to any wrongdoing.

In case you didn’t already feel like Teresa is a head spinning bitch, she earns it when mimicking Melissa’s singing. Teresa tells her to sing something so she does, proving that she can. Teresa then decides to say that she can sing too and mocks Melissa. Melissa swings back by saying that they all know her mom actually cooks and Teresa just tweets photos of it. Caroline mentions how Teresa has to push her family’s success down to make herself feel better.  Melissa is just swinging at Teresa for calling her a gold digger, a whore and everything else. She really gets to the bottom of it and calls Teresa out for being jealous of her whole life. She says Teresa wants her to be as miserable as she is. Bingo!

Everything is about Teresa. Her family is on the show to betray and hurt her. They are gaining fame thanks to her and perhaps the best thing yet- Teresa says that Melissa’s song was written about her. Apparently all roads lead to Teresa.

Ahhh finally, Joe Giudice takes the stage. Put him beside his wife and I’m not sure which one is more disgusting. He says that Teresa is great at everything and he loves her. Bravo shows a nice package of Joe’s infamous phone call, also footage of his kids calling him names. Joe apologizes for calling his wife names but still insists that he wasn’t talking to a woman let alone a girlfriend. He also complains that Bravo showing that footage cost him money because he basically bought her love back. She says her money is her money and his money also belongs to her.

Andy asks Jacqueline if he has ever heard Joe call his wife names. Jacqueline spills the beans and says she has heard it all before. The name calling is very familiar and it’s often followed by them punching each other. Teresa asks Jacqueline if her husband cheated on her a few years ago, swinging another opportunity wide open for Jacqueline to take a shot. She says she trusts her husband but rattles off a list of times Teresa supposedly caught Joe cheating. With his secretary, the baby sitter, basically you name it he has hit it. Joe tells Jacqueline she needs to get her head checked. Joe also tells Melissa that no one cares about her or her marriage. This reunion ends with Joe literally burping at Melissa. Next week the rest of the husbands join the onstage mess!

See you next week for a hot live recap of the final reuni0n!