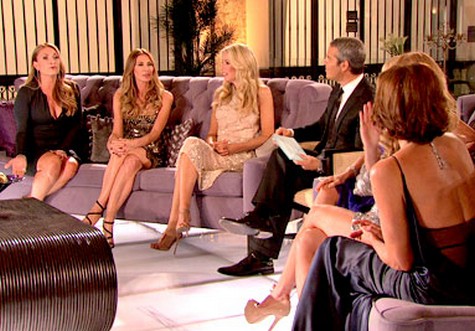 Tonight on Bravo is an all new episode of the Real Housewives of New York called “Reunion Part I.” On tonight’s  show the drama never ends for the NYC ladies, as they sit down with Andy to discuss a season-full of rumored affairs and sex-addict fathers. If you missed last week’s show called “All’s Well That Doesn’t End Well” there is a full and detailed recap HERE for you!

On last week’s show a night of charity turned into a night of chaos as Ramona threws an event for domestic violence victims and while Aviva was a no-show, her father, George, goes in her absence and tried to demand an apology from Ramona. Sonja and Heather tried to put the finishing touches on Sonja’s toaster oven box and the winning look took the team by surprise. Aviva met with Heather for her fitting and was hesitant with the look that is chosen.

On tonight’s reunion show it’s no surprise Ramona takes a ton of heat for…being Ramona, but surprisingly, Carole takes her turn being scrutinized by the wives for being hypocritical in her interviews. Later on, Aviva’s ex Harry becomes a hot topic, and the ladies accuse Aviva herself of bringing him up the most, to the press as well as on the show.

Tonight’s episode is going to be filled with the usual Housewife drama and you won’t want to miss it, so be sure to tune in for our live coverage of the show tonight at 9 PM EST! While you wait for our recap hit the comments and let us know what you thought of “The Real Housewives of New York” season 5! Also we have a sneak peek video of tonight’s show below!

It makes sense that the reunion for The Real Housewive’s of New York City would take place at The Museum of American Finance in lower Manhattan. Andy Cohen, right out of the gate wants to know why journalist, Carole Radziwell even wanted to do the show. She explains that as a journalist you’re drawn to spectacle and she wanted to be a part of the housewives franchise. Early on there was a pissing match between Carole and LuAnn de Lesseps. Carole always felt that LuAnn was trying to one up her at every moment. Bravo shows numerous examples of the two women and it does seem to be a non-stop tit for tat match. LuAnn is always trying to one-up Carole.  Seeing that package made me realize why Carole gripped about the whole situation. The ladies sit onstage arguing over a pair of earrings and who wears what designer. After last night’s fireworks on RHONJ, this is a huge YAWN.

Carole is confronted for only talking smack in interviews and never speaking her mind to the ladies. Carole thinks her snipping was meant to be funny and came across that way but everyone else disagrees. It’s pretty clear that Heather Thompson has Carole’s back no matter what. She does battle with LuAnn on Carole’s behalf.

Finally after 20 minutes the subject changes to Aviva Drescher’s ex, Harry Dubin, who also dated Sonja Morgan.  Aviva admits that it bothers her to know that most of these women have dated Harry. Sonja calls her on the carpet and says that Aviva knew exactly what she married and she talks horribly about the man to the press so he should be fair game to the rest of the women as well. Aviva suggests that for the sake of the kids both she and Sonja shut up about their legal troubles. Fabulous idea but of course Sonja isn’t going to listen to anything she has to say.

You know that Aviva is basically afraid of life, right? Well if you didn’t Bravo is showing a great series of clips to demonstrate just how crazy this chick really is. Total, total drama queen here. She’s now trying to say that she is very normal for someone that at age 6 was trapped in a machine for 3 hours until she finally lost her leg.  As she discusses it she explains that it has left her basically a big ball of anxiety. Aviva is crying over it as Ramona is rolling her twitching eyeballs while everyone else, including Sonja seems to understand where she’s coming from.

After we get the Aviva BS squared away it’s time to tackle the spat between Heather and Ramona. They were never friends from the start and I doubt they’ll ever be close. I’m realizing that Ramona has issues with nearly everyone as now she and LuAnn are refusing to talk about their problem that will remain undisclosed. They both agree that they don’t trust each other.

St. Bart’s was a three episode cluster filled with drama, drunkenness and random outdoor hook ups. Aviva resorted to calling Ramona and Sonja “white trash” and it was only downhill from there. Aviva sits on this stage and attempts to apologize once again for her “unhinged” and dark behavior but they just don’t want to hear it. Ramona says she was repeatedly attacked by Aviva while Sonja points out that each apology was immediately followed by another tongue lashing so she doesn’t trust a word from Aviva’s mouth. That statement lead’s to an escalation that of course continues into next week!

See You Next Week For Our Live Recap!