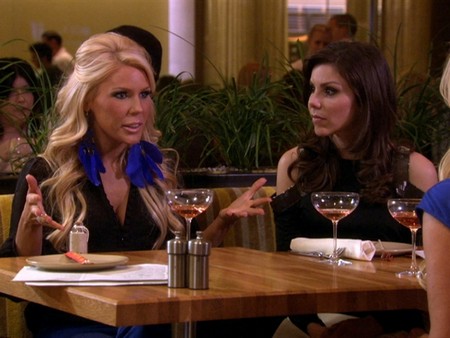 Tonight on Bravo is an all new episode of The Real Housewives of Orange County. On tonight’s show, the second part of the season brings more drama at Heather’s luxury bash. If you missed last week’s show, we have a full and detailed recap for you here.

On last week’s show Heather threw her first party as “Mrs. Heather DeBrow” and her legal name change was the whole point of the party. Heather’s house was all decked out. Tamra thought it looked like a “Hotel”. Alexis and Sarah walked in and Heather wasn’t happy to see Sarah, she thought she looked like a “Vegas stripper”.

Meanwhile, Brooks gave Vicki a fur coat, comments are flying all over the party about it and it’s only a matter of time before it reaches Vicki’s ears.

On tonight’s show in the season finale: part 2, the drama continues to boil over at  Heather’s first luxury bash. Some really bizarre conduct forces Heather to step forward and take action. One husband crashes the bash and confronts another husband on the spot. Get ready for the ultimate “Battle Royal” between……Vicki and Tamra.

RECAP: Fireworks started flying last week and they are sure to continue tonight at Heather’s party.  First off, Gretchen gives Tamra a big clunky charm bracelet that is totally personalized with charms that characterize her strength.  Tamra breaks down and cries with love and gratitude for the fact that they are finally real friends.

Sarah is still getting raked over the coals for eating the bow off of Heather’s special cake.  Sarah is crying and Heather is in bitch mode.  She decides that it’s time for Sarah to leave which turns into a huge battle.  Slade steps in and explains to Alexis that her friend needs to leave.  Slade walks her out as Heather debates whether Sarah is psycho or drunk.

Vicki is, as usual flipping about her family.  She feels Ryan stole her daughter away by marrying her and she wants Ryan to help the family to like Brooks.  You know, Brooks, her deadbeat boyfriend that is kept and paid for.  Meanwhile, Alexis’ control freak, “entrepreneur” husband Jim decides to make an appearance. It’s cute how everyone pretends to be happy to see him.

Vicki is jealous of Tamra and Gretchen’s friendship.  She keeps calling Tamra a brown noser for befriending Gretchen.  As this is going on Jim decides to grab Heather’s husband, Terry, to confront him on some of the negative comments he has made about Alexis.   She tries to stop Jim and he asks her in front of everyone, “What, do you wear the pants now?” completely stunning every guest within earshot.   Heather intervenes and starts to tell Jim what really transpired in Costa Rica.  Jim doesn’t want to hear it and walks out.  Alexis catches up with him and they leave together as all the other guests see it as Jim running from the truth.

Vicki toasts Alexis and Tamra rolled her eyes, which Brooks saw.  This is where all hell is going to break loose.  Terry looks like he is going to crawl under the table and Heather will go with them as all of this CRAP is demolishing her party.  Brooks keeps egging Vicki on to incite a fight with Tamra and it’s starting to work.  Tamra tells Vicki to stop letting Brooks tell her what to think and Vicki slowly begins to slide off the slippery slope of sanity.  She starts yelling back but stops and decides to leave with Brooks instead.  Tamra can’t help but follow.

Vicki keeps saying Tamra isn’t the same person who was her good friend.  Vicki gets in Tamra’s face and screams that she won’t let her speak badly to her man.  Vicki leaves and Tamra goes to talk to Brianna (Vicki’s daughter) and they console each other.  They agree that Vicki is completely blinded by Brooks.  Tamra is a mess because she loves Vicki. Vicki sends Ryan back inside to fetch Brianna because she fears Tamra will “corrupt” her daughter.  Brianna feels very bad that Vicki is willing to throw away her kids and good friends in favor of Brooks.

Heather finally gets the chance to make a toast and celebrate all of the friends that are celebrating with her.  It’s a happy moment until Vicki steals her thunder. She announces that she loves Brooks and everyone needs to deal with it.

An update on everyone, Tamra and Eddie will marry this fall.  Heather is adjusting to being called Mrs. Dubrow.  Gretchen wants a baby but not a marriage yet.  Briana and Ryan exchanged vows in front of everyone and she is six months pregnant.  Vicki have broken up then fixed things. He still drives her car.  Alexis is no longer with Fox 5 and she and Jim are opening a trampoline park.

Did you love this season?  Tell us what you thought, what were the high and low points for you?