‘The River’ Season 1 Episode 5 ‘Peaches’ Review — Is There Anything Normal On The River? 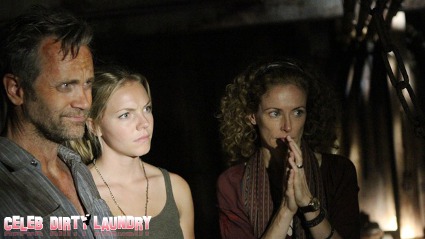 The search continued for Dr. Cole and his crew last night on the new episode, entitled “Peaches,” of The River, a supernatural drama/mystery that follows the same style and camera work found in the Paranormal Activity movies. The show got off to a slow start last night and, in my opinion, wasn’t as good as past episodes; however, there was still enough supernatural-Amazon-river-magical-juju nonsense to keep fans of the show wondering — and hopeful that they, someday soon, might actually find Dr. Cole and the illusive Source.

Last night’s episode was really all about Lena Landry and her close relationship with her dad, who also went missing with Dr. Cole. We saw many of those reflective camera vignettes of her discussing her love and appreciation for her father. Russ Landry, Lena’s father, was Dr. Cole’s rational camera man who, as it turns out, wasn’t rational enough to persuade Dr. Cole from doing crazy/magical things in a jungle that SHOULD NOT BE TAMPERED WITH!

As always seems to happen with that junker of a boat, the Magus (the name of the crew’s ship) broke down and they needed some spare parts. Thankfully, another boat was coming down the river and, before we knew it, a group of overly friendly (too friendly) people came speeding down the river in a little zodiac. With things to save the day! Yahoo!

The Magus Crew asked the people if they had spare parts and, luckily, they did. The Magus welcomed the crew, who we soon discovered to be from the Exodus, a very mysterious ship that’s way too old to be functional. They had dinner and drank (got drunk) and partied. Lena and Jonas, the cameraman they found last week, ventured off the Magus to inspect a mysterious noise coming from the “new boat in the neighborhood.” When they got on board, Lena made an unusual discovery: she found her father. Locked up and in shackles, unable to leave. Imprisoned. He warned the two to leave, that they had to get off the ship by sunrise or they’d be trapped on the boat FOREVER. Yep, Pirates of the Caribbean style. *sigh*

Tess eventually got lured onto the ship, making everyone but Lincoln, Emilio, AJ, Clark, and Jahel prisoners. The captive crew soon found out that they could broadcast their whereabouts via a camera they had on hand (they’ve always got a freakin’ camera on hand). There distress call went unnoticed for a significant amount of time, but Jahel, our favorite lil’ mystical friend, became aware of the broadcast. She radioed Lincoln and Clark, who quickly found the Exodus, reclaimed their crew, and had to face an entire crew of half-undead beings. Luckily fire was able to destroy them. Lena urged her father to step off the boat before it was too late, but he told her that he was one of them now and could never leave the boat. So he stayed on board the burning ship to die (I think they finally died, it was sort of unclear to me).

Lena was, of course, distraught over this event and I suspect we will see her dealing with this trauma on next week’s episode. As a whole, I thought last night’s episode lacked the originality I’ve been finding so intriguing. But I hope the show can redeem itself next week. Based on the preview at the end of last night’s episode, the upcoming show looks like it’ll be very good.

Do I have any fans of the show out there? If so, let me know what you thought of last night’s episode. If you need to get caught up on this season so you can watch next week’s all new episode, CLICK HERE TO GO TO OUR RIVER SECTION.