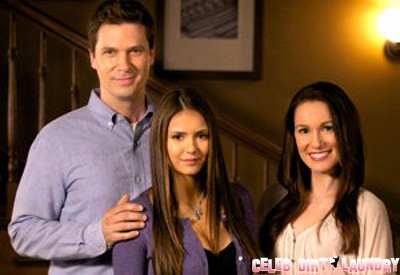 The Vampire Diaries season finale, to air on May 10th, will be filled with more juicy flashbacks. If there’s one thing TVD does well it’s making sure the characters’ back-stories remain relevant to the current story arc. They’re masters with the flashbacks! The episode, which will serve as the finale for season 3, will feature a much simpler time and focus on the matters of family, specifically Elena’s home life — before her life was forever altered by the supernatural.

“One of the things we want to do in the finale is explore a time for Elena when life was simpler,” executive producer Julie Plec says. “She had parents and no vampires in her life.”

Now we know what y’all are thinking: Bah! No vampires? I must have lots of vampires — SO MANY VAMPIRES! Well, I’m sure you have nothing to worry about. The show will be juicy and filled with excitement (remember: TVD is no stranger to crazy cliffhangers). But it will also be nice to see a different side of this story.

However, with good moments come the bad, and if you remember anything about Elena’s story then you know her parents died in a violent car crash. And Elena almost did, too!

“Elena almost died with them but Stefan saved her,” Plec says. So fans need to remember that very crucial element.

On filming the violent car crash, which involves a bridge and lots of underwater chaos, Nina Dobrev says:

“It’s something I hopefully will never have to experience in real life — trying to survive underwater while trying to save other people. It was quite intense and a little scary. I’m used to being underwater with a tank, but having to act without the tank is completely different. We were in the water two days for eight hours a day. By the end, I was exhausted and slept like a baby.”

Are you looking forward to the season finale. Probably not . . . because that just means we have to say goodbye to some of our fave characters. Don’t worry, we won’t have to say our goodbyes quite yet. There are still a few more episodes to air. The next new episode will air on April 19th. CLICK HERE to get a sneak peak!