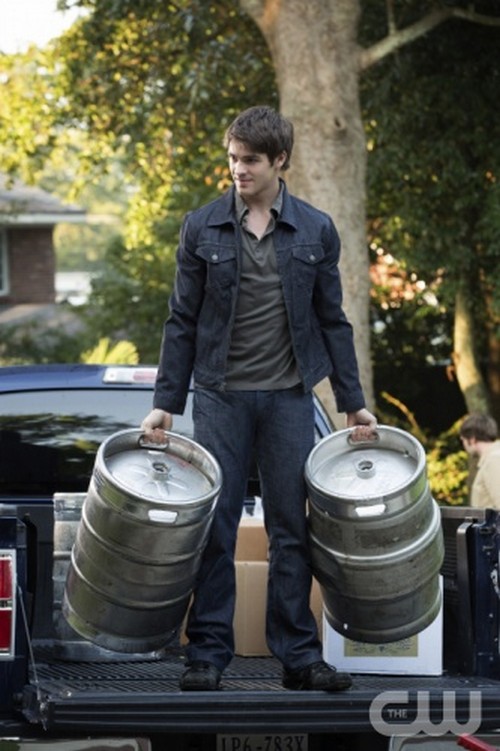 Tonight on the CW my favorite show THE VAMPIRE DIARIES airs with a whole new episode called “My Brother’s Keeper.” On tonight’s show Caroline (Candice Accola) does her best to be there for Stefan (Paul Wesley) and Elena (Nina Dobrev) in a tough time. Did you see last week’s premiere episode? We did and we recapped it here for you.

On last week’s show the drama continued with Elena as she coped with being a newly turned vampire. And it did not proveto be sunshine and rainbows, folks. The transition was hard for her, and now she was faced with yet another terrifying obstacle: hallucinations and visions of the past. The major question surrounding the episode was what  Elena would do as a result of these visions — what deadly, fatal mistake will she make? Elena has already made mistakes with her fangs, like almost completely eating Matt for example, so it’s no surprise that Julie Plec and the writers are going to continue making Elena’s life a living hell.

On tonight’s show THE MISS MYSTIC FALLS PAGEANT — Caroline does her best to be there for Stefan and Elena in a tough time. Damon tries to convince Stefan to help him uncover Prof. Shane’s (guest star David Alpay) motives, but Stefan is intent on carrying out a different plan with Klaus. At the annual Miss Mystic Falls Pageant, Elena and Caroline give April (guest star Grace Phipps) advice on which dress to wear, while Tyler and Hayley (guest star Phoebe Tonkin) work together on a secret project, and Damon confronts Prof. Shane with his suspicions. Alarmed by the vivid nightmares he’s having, Jeremy turns to Matt for help, but the situation escalates sooner than anyone expected. Olympic Gold Medalist Gabrielle Douglas also makes an appearance. Jeffrey Hunt directed the episode written by Caroline Dries & Elisabeth R. Finch.

The Vampire Diaries Season 4 episode 7 ‘My Brother’s Keeper’ airs at 8PM tonight on the CW and we will be live blogging it will all the up-to-the-minutes. So come back to this spot and spend the evening with us enjoying the show! Make sure to refresh often to get the most current update!

Tonight’s recap: The show opened tonight with Stefan and Caroline speaking.  Stefan is in the woods exercising and trying to forget about Elena.  He tells Caroline that he and Elena have broken up.   Caroline is shocked, Stefan lets her know that Elena admitted she has feelings for Damon.  Caroline is going to smack some sense into her.

Caroline see Elena and hangs up.

Meanwhile, Klaus gets a strangle hold on Stefan and tells him that he better keep his mouth shut and not let anyone know about their being a cure for vampire-ism.  Stefan promises he will.  Klaus tells Stefan he has to work on getting Jeremy to kill more vampires so the map on his arm can start growing.  Remember Jeremy is a vampire hunter now and each time he kills a vampire a map gets bigger.  That map is suppose to lead to a cure.

Stefan goes to see Damon and tells him that he and Elena broke up.  Damon ignores him and talks to him about Professor Shane.  Damon is suspicious of him.  Stefan refuses to help him investigate.

Hayley is still in town and is trying to break another hybrid of Klaus’ sire bond.

Elena is at home and Jeremy comes in and helps her with her necklace.  Jeremy tells Elena that he wishes she would stop acting like she was his sister and strangles her.  He wakes up it was a dream.  He has a knife in his hand.

Matt wants to know how Jeremy wakes up with a knife and does not know how.  Jeremy is afraid he has been killed too many times like Alaric.  Matt reads about becoming a hunter and tells Jeremy it is actually that.  He makes Jeremy promise to tell Elena.

Caroline, Elena and April are picking out a dress for the Miss Mystic Falls pageant.  Damon shows up he wants to know where’s Professor Shane.

Damon leaves and Elena follows after him.  She tells Damon they need to talk but Damon tells her Stefan let her in on the fact they broke up and he is not sorry.  She wants to know what Stefan said.

Elena asks Damon if Stefan told her why.  Damon tells her NO and he wants Elena to tell him why.  Elena tells Damon he was the reason they broke up.  Professor Shane shows up just at that moment.  Damon leaves with Professor Shane.

Damon tells Professor Shane he is looking for another hunter.  Damon asks Shane why he is there,  Shane tells Damon he thinks too highly of him.  Damon then asks Shane if he knew April’s father.  J asks Shane how he convinced the Pastor to kill all the people he did.  Shane is not pleased.

Jeremy shows up in an underground cell where Stefan is.  Stefan asks Jeremy if he wants to help to make his sister human again.  Stefan has the murderer from the hospital tied up and he wants Jeremy to kill the man.  He convinces Jeremy to stake him and kill him.

Back at Mystic Falls Pageant Caroline is directing what is happening and Klaus comes over to see her and she tells him she is annoyed.  Tyler and his new girlfriend come in.

Matt comes to see Elena and asks her if Jeremy has told her about his nightmares where he kills her.  Obviously, from her reaction you can tell he has not.

Jeremy has not showed up at the ceremony and he was supposed to accompany April, Matt fills in.

The members of the court dance.

Jeremy shows up in an underground cell where Stefan is.  Stefan asks Jeremy if he wants to help to make his sister human again.  Stefan has the murder from the hospital tied up and he wants Jeremy to kill the man.  He convinces Jeremy to stake him and kill him.

Back at Mystic Falls Pageant Caroline is directing what is happening and Klaus comes over to see her and she tells him she is annoyed.  Tyler and his new girlfriend come in.

Matt comes to see Elena and asks her if Jeremy has told her about his nightmares where he kills her.  Obviously, from her reaction you can tell he has not.

Jeremy has not showed up at the ceremony and he was supposed to accompany April, Matt fills in.

The members of the court dance.

Damon is watching Professor Shane and Tyler comes up to him.  Damon tells Tyler he is paranoid because of all the things that have happened and Professor Shane knows all.

Jeremy walks into the party and April asks where he was.  Jeremy asks April what Shane was doing here.  April tells Jeremy that he talked to Shane about her dad.  Jeremy tells April her Dad died a hero.

Damon comes up to Shane, he wants a name of another hunter.  Shane tells Damon there is no other name finding another one is next to impossible.  Damon tells him he has 5 seconds to give another name or he will die.

Shane tells Damon even if he finds the hunter and finds the map and finds the cure.  It is somewhere that only a certain type of witch can open.  Damon asks what witch and Shane admits it is Bonnie.

Caroline is set to announce who Miss Mystic Falls is, April Young, the Pastor’s daughter.

Elena sees Jeremy in the party and heads towards him.

She finds Jeremy in a room with a stake and he tells her Connor was right.  All Jeremy can think of is killing vampires.  Elena tells him, he is nothing like Connor.  Jeremy tells her everything inside him is telling him to drive the stake through her heart.  Elena tries to calm him down by telling her he is her sister and would never do anything to hurt him.

Jeremy’s hand is bleeding and Elena asks him to get it away from her.  Jeremy falls to the ground and Elena goes to see what is wrong.  He sticks a piece of wood in her neck.  He is about to stake her when Matt comes in and tries to stop him.  He finally convinces him with Stefan and Jeremy leaves and Stefan pulls the stake from her neck.

The show opened tonight with Stefan and Caroline speaking.  Stefan is in the woods exercising and trying to forget about Elena.  He tells Caroline that he and Elena have broken up.

Klaus tells Caroline there is only one time he thought of being human.  Seeing a hummingbird and how hard he works to just to live.

Elena is going after Jeremy.  Stefan tells her it is his fault.  Elena is freaking that Jeremy has been with Stefan while killing vampires.  She is totally fixed and she realizes that he is sacrificing Jeremy to save her.

Elena tells Stefan this is who she is not, the old Elena died when she fell off the bridge, she tells him to let her go.

Jeremy is packing, he cannot keep living there if he is going to kill his sister.  Matt tells Jeremy that Elena knows that and that is why she moved out and Matt moved in.  Jeremy asks where Elena is.

Elena shows up at Damon and Stefan’s house.  She tells them she cannot stay at home anymore.  Stefan tells her to pick a room and tells her he will leave.

Tyler goes to see Kim and the sire bond is broke.  He texts Hayley and she turns around and she is with Professor Shane she tells him they broke another one.  She tells Shane she wants Tyler out of it when it all goes down.  He tells her they have to break another sire bond and then they can see.

Elena tells Damon she is not so great at the Vampire thing.  Damon tells her he has never seen her more alive.

Elena tells Damon when she saw the couples dancing today at the Miss Mystic Falls Pageant she wanted to dance with him.

He takes her hand and they dance.

Caroline makes Stefan promises that he will keep looking for the cure.  Stefan tells her Klaus won’t let him.

She then tells Stefan that Tyler is almost finished breaking all the sire bonds.  Then Caroline starts saying OMG, OMG.

Caroline and Stefan realize that Elena is sired to Damon.