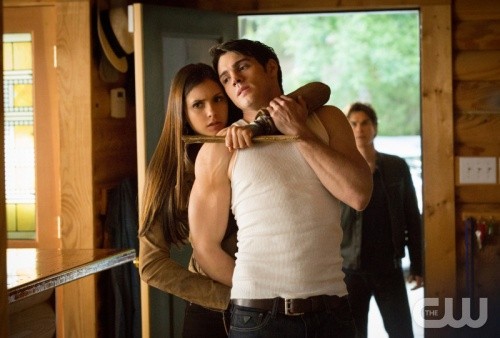 This week’s THE VAMPIRE DIARIES was fantastic, action packed as usual and we are heading into the mid-season finale.  Next week we will be celebrating the holidays with the Salvatore brothers and the gang at a mystics falls Winter Wonderland-themed party.  As usual, you can count on us to provide you with the juiciest, bloodiest, most magical previews and teasers out there. Continue reading to sink your fangs into next week’s  The Vampire Diaries mid-season finale spoiler.

On tonight’s show we spent a lot of time between current time and flashbacks to 1942.  Damon and Stefan determined that Elena was sired to him and Damon told Stefan that this was not the first time.  It seems that in New Orleans in 1942 Damon was sired to a women called Charlotte.  Damon knew a witch at the time that may be able to break Elena’s sire bond.  When the boys find the witch’s granddaughter they find out to break the bond they need to sacrifice 12 innocents.  However, they soon find out that this was a lie and the only way to break the sire is for Damon to cast Elena aside and leave her.

Meanwhile we learn why Hailey is working with Prof. Shane, it seems he has information on her parents that she wants.  He wants 12 werewolfs unsired to Klaus and he wants Hailey to get them for him before he will release the information.  Tyler is having problems with another werewolf Kim she wants to be the alpha wolf and so Tyler had to challenge her and make her submit.  So much happened in tonight’s episode it was fast paced and fantastic.  If you missed tonight’s show you NEED to read a full and detailed recap here!

Spoiler alert: If you’re one of those people who doesn’t like spoilers, stop reading now! We have some juicy spoilers for you about the season 4 episode 9 of CW’s “The Vampires Diary.”

Official CW synopsis of next week’s episode:  A WINTER WONDERLAND IN MYSTIC FALLS — As a Winter Wonderland-themed party fills the streets of Mystic Falls, Stefan (Paul Wesley) and Caroline (Candice Accola) find themselves at odds with Tyler (Michael Trevino) over his plans for Klaus (Joseph Morgan) and his hybrids. When Caroline proposes a solution to their problem, Hayley (guest star Phoebe Tonkin) finds a dramatic way to make it clear that she is not on board. Later, Klaus makes a discovery that leads to chaos and violence. Meanwhile, Elena (Nina Dobrev) and Damon retreat to the Gilbert Lake House to help Jeremy (Steven R. McQueen) conquer some dangerous inner demons with the help of Bonnie (Kat Graham) and Professor Shane (guest star David Alpay), who reveals a piece of ancient history that leaves them all speechless. Zach Roerig also stars.

On next week’s show TV Guide has let out a tidbit from Editor Natalie Abrams, she said, “There will be mass casualties in the midseason finale, including someone you’ve known since Season 1.”  Oh No, I wonder who that will be.  Any ideas?  Klaus or maybe Tyler?  If a death is not enough, there promises to be a mass of causalities too.

What better than to have a holiday show with our favorite cast?  Next week it is a holiday Wonderland themed party episode with lots of drama and holiday fun.

Tyler is ready to go to war with Klaus and kill him.  I’m not sure how Caroline is going to feel about that I think she secretly has feelings for Klaus.  Another person not happy is Stefan and he tells Tyler he cannot let him do it.  As we know from several episode Klaus may know how to get a cure for Vampirism and Stefan wants that for Elena.

Stefan is still a little skeptical if Klaus is telling the truth and comforts him about it.  Klaus of course laughs and suggests he is the best friend Stefan has. hmm with friends like Klaus who need enemies.

It looks like things may be heating up again for Bonnie and Jeremy.  Elena and Damon head to the Lake House to try to cure him of his murderous tenancies towards vampires.

It looks like Damon has not cast Elena aside just yet.  At one point in the preview he tells her he wants to throw her in bed and never let her go and she asks him why he does not just do it.  Later we see them back in the sack.  Who do you like Elena?  Are you Team Stefan or Team Damon?  Hit the comments and let us know!

The Vampire Diaries Season 4, Episode 9 “O Come All Ye Faithful” airs on the CW on December 13th, 2012. Check out the preview video  from episode 9 and let us know in the comments below what you think!