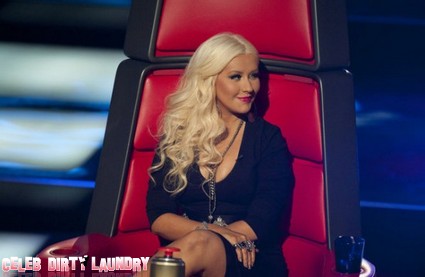 Tonight the second episode of NBC’s The Voice season 2 airs and it is a 2 hour special.  If last night’s show is any indication it is going to be a fantastic season.  Stand by as we live blog the show tonight at 8PM with all the up-to-the-minute details!

Last season I did not watch The Voice and I did not know what I was missing until I tuned in last night and watched the show after the Super Bowl.  If you tuned in you will agree the show is a borderline addictive singing competition; chances also are you got a taste of some of the season’s upcoming talent, some of which is quite amazing (though we’ll let you be the judge of that).  If you missed the show you can catch our recap here and our review here.  What did you think of the first episode of “The Voice”?

On tonight’s show the blind auditions continue and Prince will be coming to the voice.  Not as a judge but he is the subject of a special melody that will be performed by the judges tonight.  The melodies include Christina Aguilera doing “1999,” followed by Cee Lo Green’s “Little Red Corvette,” Adam Levine’s “I Wanna Be Your Lover” and Blake Shelton’s “Kiss.”   You don’t want to miss the show!

The Voice airs tonight between 8PM – 10PM EST and we will be live blogging the show with all the up-to-the-minute details, so come back to this spot and spend the evening with us.  Refresh often to get the most current updates!

TONIGHT’S SHOW:  The show starts off tonight with The Voice judges singing some of Prince’s songs and they rocked it.

First up tonight The Line – Hailey & Leland singing American Girl.  Blake presses the button first.  The rest of the judges follow soon after.  Adam tells them that in all the best duos the individual has to shine.  He wants to be part of their chemistry.  Cee Lo asks them if they love each other and if they are a couple.  They are not!  Christina tells them she know when something is amazing when she hears it and they are amazing.  Blake tells Hailey that he has worked with a lot of female singers and he is married to one.  The other judges bug him because he always brings up his wife, Miranda.  They choose to go on Christina Aguilera’s team!

Jamar Rogers from the Bronx is a recovering Crystal Meth addict and is HIV positive as a result of his drug use singing Seven Nation Army.  Cee Lo is the first to press the button and the only judge that choose him.  Consequently he will be on Cee Lo’s team.

Neil Middleton he had a bad accident 8 years ago and was not supposed to walk again – but today he is walking.    He is singing I Heard It through the Grapevine.  Cee Lo tells him it was an interesting rendition.  Christina thanks him but they do not choose him.

TJ Gibson , Aly Jados and Sam Jones did not get a chair to turn.

Gwen Sebastian, 37, she has put on hold having kids to pursue her music. Gwen is singing Stay.  Blake is the first judge to press the button followed by Cee Lo and Adam Levine.   Christina tells her she has a beautiful voice.  Blake tells her she is a great country vocalist and really knows what she is doing.  He tells her he is her country man.  Adam agrees Blake is the country guy but it would be nice for her to try something different.  Cee Lo tells her he just turned around to tell her she is appreciated.    She chooses to be on Blake’s team.

Pamela Rose, 28, singing Already Gone.  No judges turned the chair for her.  Adam tells her she is beautiful but she has some pitchy problems.  She does not make a team.

Kim Yarbrough, 50, singing Tell Me Something Good.  Adam Levine is the first judge to press the button followed by Christina.   Adam tells her when he turned around she was what he wanted to see.  Adam tells her he is going to fight with Christina for her.  Blake tells her Adam won last year trying to influence Kim.  Adam tells her she has no limitation.  Christina tells her she is the kind of artist that can sing anything that she wants to.  Kim chooses to be on Adam’s team.

Angie Johnson singing Heartbreaker.  Cee Lo presses the button for Angie.  Cee Lo is the only judge to choose her.  He asks her if she is as beautiful as he thinks she is.  Adam says he is not sure if Cee Lo is happy that she is hot or that she has a good voice.  Christina tells her it was a tough song.  Angie is on Cee Lo’s team.

Dez Duron is a student at Yale playing football who took a semester off for music  – he is singing I want it that way.   None of the judges turn their chair.  Cee Lo tells him he did a great job.  Christina tells him he is really cute.   Christina thanks him.  He did not make it to a team.

Lindsay Pavao singing Say aah. Christina presses the button for her followed by Cee Lo and Blake.  Blake tells Lindsay he loves her voice and her hair is bad ass.  He tells her she sounds like Fiona Apple.  Christina tells her she enjoyed every second of the song.   She feels she has a unique quality and tone to her voice.  Cee Lo tells her she is unique and he wants to nurture her.  Lindsay choose to be on Christina’s team.

Hoja Lopez singing Teenage Dream – none of the judges turn around.  Blake tells her it was a pretty good performance.  Adam felt that it was her nerves and he knows she could not help it.  Adam tells her they are sorry.

Angel Taylor singing Someone like You.  Adam is the first to press the button, Blake also wants her and presses his button.   Cee Lo is next to want Angel.   Adam tells her it was a tough song to sing and he could tell she was nervous in the beginning.  Blake jumps right in to say that the beginning was great.  Cee Lo tells her he thought she was great tonight and did a great job.  Angel tells Blake she has a massive crush on him.  Blake tells Angel he does not know what he can do with her but he will damn well try his best.  Adam tells Angel he does know what he can do for her and he wants her on his team.   Angel decides to go on Adam’s team.

That’s a wrap for this week, make sure to come back and spend the evening with us next week!  Let us know what you thought of the show, sound out in the comments below!