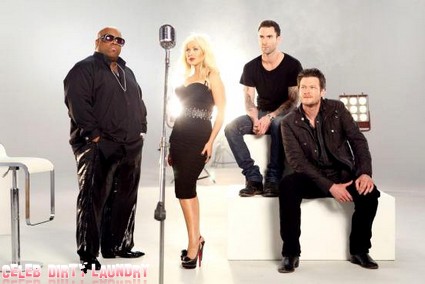 The search for for ‘The Voice’ continues tonight with the third round of blind auditions.  If you missed the first 2 auditions you can read our official recaps here.  The blind auditions prove once again why The Voice is the best singing competition on television today.  Each of the two past episodes have given us phenomenal nights of music.

There is one more week of blind auditions to go before the battle round begins.   Are you rooting for anyone yet and what do you think about the vocalist-coach pairings so far?

The Voice is doing fantastic in the ratings and has proven to be a major hit for NBC. The season-two premiere following the Super Bowl on Sunday earned NBC’s best ratings for an entertainment show in six years.   Monday’s episode earned the network’s best numbers for that particular timeslot in nearly eight years

We also heard news last week that Christina Aguilera has signed a contract to continue her stint on the judging panel for a third season of the singing competition.

The Voice airs tonight between 8PM and we will be live blogging the show with all the up-to-the-minute details, so come back to this spot and spend the evening with us.  Refresh often to get the most current updates!

Tonight’s show: Tonight on The Voice the blind auditions continue, the coaches only have 12 spots each and they are competing hard to get who they want.  First up is:

Sarah Golden, 27, from Houston,  Texas – she has had a couple of opportunities with record labels but her look does not work.  She feels no one cares what is coming out but rather what someone looks like.  Sarah sings You And I.  Cee Lo is the first judge to turn around – Blake is next. Christina tells her it was lovely and sweet. Christina tells her she heard a twang in her voice that made her good for someone else who she won’t name. Blake tells her she is unique and does not sound like anyone else and it is an honest sound and real. Cee Lo asks if she is a country singer and she tells him she is a folk singer. He tells her the show represents possibilities and he would like her on his team. She decides to go with Cee Lo.

Elley Duhe, 19, she quit school in her senior year to pursue singing. Elley is singing ‘Mercy.’  No judges turn around! Adam tells her the last note was peefect and if they had heard it earlier they all would have said yes. Christina tells her she has the best attitude and is very gracious. Blake tells her she was a little pitchy but wishes her luck!

Pip, 19, he says he has been singing before he could talk.   Pip is singing The House of The Rising Sun.  Adam turns his chair almost immediately.    Blake follows a couple of notes later and then Christina and Cee Lo.  All four judges want Pip.  Blake tries to sell him to come on his team because his team does not have many guys.  Christina tells him she gives time and attention.  Cee Lo tells him he has an old soul.  Adam tells him it takes a real man to wear a bow-tie.   Adam thinks he could sing almost anything and he wants to work with him.  Christina tells him she will fight for him.  Pip chooses Adam Levine because he was the first judge that turned.

David Grace, 28, from Texas who grew up playing Football.  He is singing ‘Sweet Home Alabama’ tonight.  Christina tells David he has a great voice.  Blake said it was a bit weird for him – not wrong.  Adam said there were a few bendy moments – more a stylist thing.  Blake wishes him luck!

Katrina Parker, 34, she works as an assistant in an Insurance firm.  Katrina is singing ‘One Of Us.’   Adam is the first judge to push the button and the only judge to say yes.  Adam tells her he wants something different and it was cool and he loves that it was different.  Katrina is on Adam’s team.

Geoff McBride from Florida singing Higher Ground.  Christina is the first judge who presses the button.  Cee Lo finally presses his button just in time.  Adam tells him he can really sing and he is awesome.  Christina tells him the very first note he hit he blew her away.  He was working the audience.  He is what she is looking for.  Cee Lo tells him he wanted to give him a nod of recognition.  Geoff chooses Christina Aguilera!

Erin Martin singing Hey There Delilah.  Erin is a former model and a bit of a air head.  Blake is the first judge to choose Erin followed by Cee Lo.  Christina tells Erin Cee Lo is so happy right now.  Cee Lo tells her she is beautiful and her voice is unique and he tells her she belongs to him.  Blake tells her that her smile is contagious and she is a special sound.  Adam  tells her it sucks that he did not turn around.  Erin chooses Cee Lo.  His day is made!

James Missone, 23, from Boston singing Find Your Love.  Christina pressed her button and chose him followed by Blake and Cee Lo.  Adam is shocked he is white and Christina tells him he has soul.  He asks Adam what happened to him.  Adam told him he was great but all three of the judges turned around and he did not want to fight with them.  Cee Lo tells James he was very happy to hear his voice because it was so smooth.  James is very overwhelmed and emotional and does not want to offend anyone.  He tells them he is going with his first choice and that is Cee Lo.

Winter Rae – she has many tattoos and blue hair and looks rock but she says she has a soulful voice.  Perez Hilton is there for her audition.  Winter is singing Take a Bow.  None of the judges turned around.  Christina tells her she loved her soul but she was looking for more range.  Blake tells her that her hair is bad ass.  Adam tells her there is no reason to lose belief in herself.  Perez tells her she is a star.

Chris Cauley, 27, from Atlanta, GA singing Grenade.  Cee Lo pushes his button for Chris and then Adam.  Cee Lo tells him he is pleased by his performance.  Christina tells him he was smooth all the way through.  Adam tells him he knew he had to be part of the competition.   Chris chooses Adam.

That’s a wrap!!!  What did you think of the show?  Sound out in the comments below and let us know!