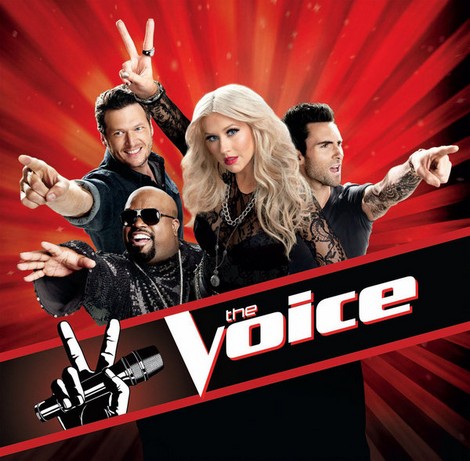 The Voice’s third season is shaping up to be one of the most contended seasons in the history of the Mark Burnett produced series. The contestants have been singing their lungs out to the four self-indulgent judges, with most getting the teams they wanted. Here’s a look at the standings so far (Monday night included):

Celeb Dirty Laundry is once again bringing you a full performance review of Monday and Tuesday night’s shows with a generous dose of critique, sarcasm and a bottle full of shut-the-hell-up juice. Read below to see how we rated your favourites.

Jordan Pruitt was signed to Hollywood Records in 2006 and released three albums before her below average audition on The Voice on Monday night. According to Jordan’s Wikipedia page, “Pruitt residing near Franklin, Tennessee and in Los Angeles, when not on tour, is preparing to record her third album.”  Jordan’s audition was wrought with a self-indulgent sharp pitch during her performance of “The One That Got Away” by Katy Perry. Her vocals were tight, nasal and jagged. Christina Aguilera was the only judge who turned around, which gave Jordan a default choice for her team. Jordan suffered from amateur singer syndrome and will most probably not make it through the next few rounds.

Dez Duron, the first interesting contestant of the night, fell from the Abercrombie and Fitch apple tree and hit all of the male model branches on the way down. This remarkably attractive singer (they’re usually not too attractive on The Voice – the reason the show exists in the first place) did a rendition of “Sara Smile” by Hall & Oates. Now, whenever a hot singer exists on a reality talent show, his/her future on the show is immediately cemented. There’s no listening to vocal ability, there’s no reaching into the depths of emotions and there’s no rational thinking. A singer with a sad-eyed smile is able to go places. However, let us assure you that we do not judge singers on what they look like, except if they look like Dez Duron. We’re joking. This dude is vocally not too attractive. His voice was slightly nasal and too affected, but he pulled it off in the end and three judges, with the exception of Adam Levine, turned around. Dez chose Christina Aguilera as his mentor.

Diego Val, a kind-natured Peruvian guitarist, did a rendition of “Animal” by Neon Trees. His performance was uniquely pub-singer-with-an-above-average-voice as he strummed his guitar and scrunched his face along to the vocals. Diego hit the chorus with a melted face and we silently died inside. There was a peculiar sadness in Diego’s voice and performance. It was like watching a glass shatter in the garden and leaving the shards to illuminate in the beating sun. There were problems with Diego’s diction, so instead of articulating the lyrics properly, they came off as heavy-handed and tiresome. Diego slowed down his performance, switched over to Spanish and for a split second we glimpsed the meaning of life. His Spanish verses swept away the oddity of the preceding performance and bathed itself in splendor. Bye-bye Dez Duron! Cee Lo Green turned his chair around as the only mentor and Diego had to choose Cee Lo by obvious default.

Alexis Marceaux was a Hurricane Katrina survivor who did a rendition of “Go Your Own Way” by Fleetwood Mac. Her upper notes, especially during the chorus, were well behaved and in place. It was, unfortunately, her lower register which suffered from broken ankles. Her pitch wasn’t radio friendly and there were glimpses of musical theatre in her voice, but luckily for her, Cee Lo turned around just after the chorus. Alexis reached for an extremely strong note during the finale of the song, but faltered miserably and had to make do with a gearing down of notes. She wasn’t the most amazing singer we witnessed on Monday night, but she was attention-grabbing and unusual, which always makes for a great music artist. If Alexis is able to shake the musical theatre in her voice – “go your own way”, instead of “gouuu your own waaaay” – she might be heading for some awesome performances. Once again, Cee Lo was the only judge who turned around and Alexis had to choose him by default.

Tina Turner always works on a reality talent show. The karaoke-preach-it-sistah anthem of Proud Mary is usually the fall-back choice for any beautiful woman with amazing curves and a voice crafted by God; It was no surprise that the super voiced Michelle Brooks chose this song as her go-to song during her blind audition. In one of the best renditions of this karaoke masterpiece, Michelle not only destroyed every other audition of the night, but stormed ahead with her insane pitch and gospel roots. The moment Michelle hit the upper “Proud Mary” lyrics during the intro, our ears fell off and our eyes squinted from the glaringly obvious goose bumps on our face. This was, by far, one of the best performances of the season and came in at a very, very close second place performance of the series.  Three of the judges, with the exception of Blake Shelton, turned around. Michelle chose Adam Levine in the end.

Brandon Mahone had the most disturbing maturity levels of the season with his rendition of “I Wish It Would Rain” by The Temptations. This 17-year-old velvet voiced throwback delivered pitch perfect notes and almost faultless phrasing of this seminal hit. His strong upper falsetto left us reeling and his throwback performance gave us a multitude of shivers and chills. This almost unbelievable performance made three of the judges, with the exception of Blake Shelton, turn around to give Brandon the thumbs up. Brandon chose Adam Levine as his mentor of choice.

Suzanna Choffel’s Texan music teacher talent shone through in her rendition of “Landslide” by Stevie Nicks. Her voice, albeit husky, gave the song an unheard fullness and a cool singer-songwriter vibe. She was no Stevie Nicks, but she was able to pull of the finer subtleties which made the song one of the greatest songs of all time. Suzanna chose Blake Shelton as her mentor.

The sassy Terisa Griffin, slated as one of the best performers of the season, did a self-indulgent and affected rendition of “Somebody Like You” by Gotye. Yes, her performance was extremely controlled and she was vocally powerful, but it was all over the place with vocal theatrics and an expansive chorus. Readers will most probably destroy us for this, but Terisa was just too much. Blake and Christina turned around and Teresa chose Blake as her mentor.

The second night of auditions started off with Sylvia Yacoub, an Egyptian born singer who did a rendition of “Only Girl In The World” by Rihanna. We’re not sure how much one is able to do with Rihanna’s auto-tuned nasal songs, but Sylvia tried her utmost best to pull it off. Her voice, albeit extremely shaky, captured the beat of the song, but unfortunately Sylvia mostly came across as a teenager at a Ronald McDonald conference who took to the stage to impress her family and friends. Christina, Cee Lo and Blake turned around their chairs and Sylvia chose Christina as her mentor of choice. We doubt there’s a huge future for Sylvia on the show, especially in the tougher Battle Rounds.

The next contestant of the night was Charlie Rey, a smog mechanic who works at his father’s shop. Charlie’s rendition of “Home” by Michael Buble was vocally below average and reeked of self-aware performance quality. There was an attractive breaking in Charlie’s voice, but his pitch fell off the bandwagon during the more emotional moments in the song. The performance was subdued, out-of-control and a nervous wreck. “Home” is an extremely tune-driven song, but Charlie wasn’t able to phrase properly and seemed to have lost the use of his diaphragm, so the sound came off more schoolboy-music-exam than vocal-superstar-gon’-change-the-world. Adam and Blake turned around and Charlie chose Blake as his mentor of choice. We don’t envision a future beyond the Battle Rounds for Charlie.

Amanda Brown was the next contestant of the night with her exciting rendition of “Valerie” by Amy Winehouse. Amanda’s vocals were very let’s-cover-a-hot-song, but her performance made up for the similar sounding Winehouse vocals. She delivered a professional, well-thought out performance, with a strong back-up singer vibe (she is a back-up singer for Adele). Amanda did not suffer from a “look at me” performance and fluently settled in this difficult and up-beat song. We’re not sure if Amanda will be able to pull of the massive songs in the future, but she’s good enough in our books to make it through to the end. Cee Lo was the only mentor to turn around and Amanda had to choose him by default.

Cassadee Pope was the last contestant of the night with a rendition of Natalie Imbruglia’s biggest hit, “Torn”. This Christina Perri lookalike delivered strong vocals and a rock star performance, but still gave the feared karaoke conundrum of singer/songwriter vocals. Cassadee’s tone wasn’t up to par and sounded off pitch during most of the higher notes. Adam, Christina and Blake hit their buttons at the same time and swung their happy chairs around. Cassadee chose Blake as her mentor in the end.

Would you have been as forgiving as the judges with the off-pitch vocals? Do you think The Voice is losing appeal? Who was the best contestant of the Monday/Tuesday auditions? Let us know in the comments below and remember to bookmark Celeb Dirty Laundry for all of The Voice news, reviews, recaps and spoilers.