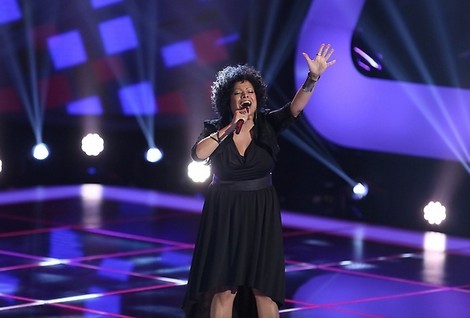 The Voice’s 3rd round blind auditions arrived last night, right alongside almost the same time slot as The X-Factor (ratings war anyone?). The season started off with a bang with the three hour extended blind audition episode on Monday, Tuesday and Wednesday. We have seen some pretty remarkable contestants, with the exception of a few over-hyped auditions. In this, the third episode of the third season, things were finally looking up for the campy and self-indulgent love fest.

Samuel Mouton was one of the first contestants of the night with his cover of “Redemption Song” by Bob Marley. If one listens solely to Samuel’s voice, one would expect him to have the appearance of a reggae infused artist, but Samuel was way different. His voice sounded dubbed and didn’t fit with his appearance at all. This was by far one of the most exciting moments in this above average reality television show. The main irk with Samuel’s performance was the direct covering of Redemption Song – vocal inflections and accent included. Unfortunately, Samuel did not deliver an original and authentic version of the song, he only delivered an above average karaoke version. Three of the judges, with the exception of Blake Shelton, swung their chairs around. Samuel joined Adam Levine’s team.

The most important viewership saving moment came in the form of Nelly’s Echo, a Nigerian-born man who did a cover of “Ain’t No Sunshine”. His performance, albeit reminiscent of Javier Colon’s, delved into the most beautiful of notes and bathed in the warmth of an unaffected voice. For the first time since the third season started, we think we have a potential winner of the show (what is it with bald men winning all the time?). Nelly’s Echo was a brilliant vocalist, with an interesting voice which marinated each and every note in a sauce of suave coolness. Only Christina Aguilera and Adam Levine turned around, but in the end Nelly’s Echo chose Christina as his mentor.

A fiery and excitable contestant named Domo came to the stage with a smooth and interesting rendition of “Don’t Cha” by the now defunct Pussycat Dolls. Oddly, when Domo reached the first high note of the song, it sounded almost exactly the same as Christina’s famous pitch-perfect high notes. Her vocal performance was powerful and underrated, until Cee-Lo Green turned his chair around and Domo fell into the trap of karaoke movements and out-of-tune vocals. Domo chose the only judge she could – Cee-Lo.

The most notable performance of the night came from Nicole Nelson who did a cover of the seminal hit “Hallelujah” by Leonard Cohen. Her audition garnered critical praise from the judges and the audience. Her vocals were exquisite and her performance was classy. Her unaffected and technically perfect voice reached the upper stratosphere of one of the biggest songs of a generation of music lovers. Her audition was by far the best audition this entire season, with only Nelly’s Echo in a very, very close second place. The vibrato at the climax was intense, emotive and was filled with some of the most beautiful sounding notes we had ever heard on The Voice. We say this, without a doubt, that Nicole Nelson is the contestant to watch this season and we predict that if she stays with her current gospel routes, she could win the entire thing. Her rendition of the song literally brought tears to our eyes. All four judges turned around, but Nicole chose Adam Levine in the end.

Alison and Crystal Steel (a mother and daughter team) did a rendition of “Before He Cheats” by Carrie Underwood and their above average performance resulted in Blake Shelton handing them praise. They chose him in the end as their mentor.

These are the pairings of the night for future reference:

Let us know in the comments below your thoughts on the third season of The Voice thus far.