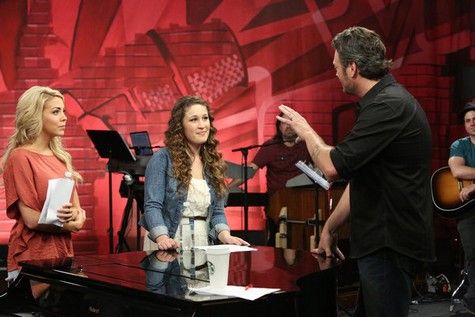 Tonight on NBC at 8PM THE VOICE returns with a whole new episode as the competition moves on to the Battle Round Part 5.  On tonight’s show The duets head down to the wire as the coaches struggle with whom to keep, steal or let go.   If you missed last night’s show you can read our full and detailed recap here!

On last week’s show the final numbers look something like this four artists were eliminated (Nicole Johnson, Ben Taub, Adanna Duru, Beat Frequency, Emily Earle) and one artist was stolen (Team Adam’s Alessandra Guercio to Team Christina).  Who were your favorites from The Voice‘s fourth night of Battle Rounds? Were there any eliminations that you you disagreed with?  Hit the comments and let us know your thoughts?

And after this week, we’ll be moving on to the knockout rounds, in which the 40 contestants who make it past the battles will be whittled down to 20!

It was announced today that NBC’s “The Voice” gets “Election Fever” in a three-night event in which America will vote for the first time this season to help decide which artists get into the Top 12 as the popular vocal competition series will have special live broadcasts on Wednesday, November 7 (8-10 p.m. ET) and on Thursday, November 8 (8-9 p.m. ET) — as well as its regular airing on Monday, November 5 (8-10 p.m. ET).

Tonight’s Battle Round Part 5 is going to be an exciting one, which you won’t want to miss. So be sure to tune in for our live coverage of NBC’s The Voice – tonight at 8PM EST! While you wait for our recap, hit the comments and let us know how what you thought of last week’s battle rounds of The Voice?

Tonight’s episode: The Battle Rounds continue, it’s night five and Cee Lo is up first with Alexis Marceaux vs. Daniel Rosa with Rob Thomas sitting in to help with the mentoring as they practice to perform, “What Do You Want From Me”.

Judges Comments: Adam loves the way Daniel sings with all his soul. Blake thinks it just comes down to someone’s taste. Christina thinks Daniel needs to turn his performance out to the audience; she loves risk takers and thinks Alexis took it tonight.

Cee-Lo has to decide who is continuing on and who is going home, he chooses Daniel to remain in the competition. None of the other judges are interested in stealing Alexis.

Up next are two hopefuls from Team Adam, Brandon Mahone vs. Nicole Nelson, they are being mentored with the help of music superstar, Mary J. Blige and singing, “Ain’t No Mountain High Enough”. Brandon is lacking confidence and gets a little pep talk from Mary to help him, meanwhile, Adam thinks that with Nicole, less is more.

Adam has to make a choice, he chooses to have Nicole continue with his team. Unfortunately, Brandon does not get stolen by the other judges.

The final battle tonight is on Team Christina, Devyn Delora vs. Marissa Anne with mentoring help from Billy Joe Armstrong and they are singing, “Free Your Mind”.

Judges Comments: Cee Lo thinks Devyn had a mature voice, but he would go with Marissa. Adam thought they were evenly matched and Marissa has a huge career ahead of her. Blake picks Marissa because she is only fifteen years old and blew him away.

Christina has to make a decision and it won’t be an easy one, she picks Devyn. Blake doesn’t even give Marissa time to think about leaving the competition, he steals her.