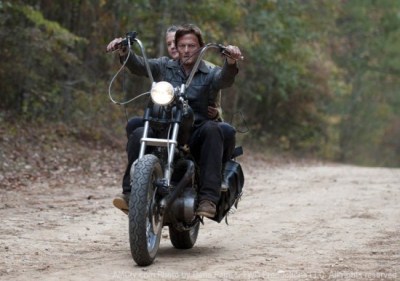 Tonight The Walking Dead is back with it’s final episode for season 2 called ’Beside The Dying Fire.’  Stay tuned as we live blog the show with all the up-to-the-minute results.

Tonight Rick and Carl return from the woods to find the farm in jeopardy. The group is split up in the ensuing chaos. With things looking grim, Rick’s leadership is questioned.  The Walking Dead boss Glen Mazzara promises that there will be a lot more bloodshed tonight and there has been wide spread speculation as to who is going to go and who is going to stay considering that Mazzara examined killing every character on the show! One thing is for sure, there won’t be a shortage of zombie bait tonight! Hershel vows to protect his farm, even if it means dying and that may just be what happens tonight when a swarm of walkers attack.

Who do you think will be killed off tonight? My bets are on Lori, Hershel, T-Dog, Maggie or Beth. Don’t forget to take our poll and let us know who you think is going to get whacked.

RECAP: The show opens up with probably one of the most disgusting scenes where zombies where feeding off of people, all of a sudden they see a helicopter and start to follow it, there are hundreds of them. They arrive at the gate that borders Hershel’s land and with the pressure of all their weight, they break through. It’s dark now and the gun shot catches the zombies attention and they turn around and head towards where Rick and Carl walking.

Daryl and Glenn arrive at the farm house and explain to everyone that Randall was turned into a walker but he wasn’t bit. Meanwhile, Rick and Carl are still walking and Rick tells him that it wasn’t Shane that Carl shot, it was a walker. Carl wants to know how Shane died when all of a sudden Rick notices all the walkers coming on to them and they make a run for it.

Rick and Carl make it to the barn, but so do the walkers and they are surrounding the whole place and trying to break in. Meanwhile in the house, Lori finally realizes that Carl is missing. At the house, everyone is picking up guns when Hershel declares that it is his farm and he will die there if he has to. Daryl remarks that it is as good a night as any.

Rick tells Carl that he loves him just before he gets him to crawl the ladder to the top of the barn while Rick entices the walkers to come into the barn, then throws down his lighter and lights them all on fire.

Daryl is on his motorcycle shooting walkers, while Glenn and Maggie are in a car with her driving and Glenn shooting. Lori is still frantic looking for Carl, in the middle of a war zone she finally decides to become a concerned mother! Jimmy was driving the camper and forgets to lock the doors, the walkers have a feast on his body.

T-Dog is in the pickup with Andrea who is trying to kill off walkers. Hershel is as bold as brass standing in the front yard and just killing off those walkers one by one. Lori tries to convince Lori to leave the house and she calls out for him while she tries to shoot walkers as well. Lori calls to Hershel to give it up, it’s time to go, but he won’t stop shooting the walkers in the front yard.

The walkers take down Hershel’s daughter Patricia. Meanwhile T Dog and Lori take off leaving Andrea and Carol to fend for themselves.

Glenn and Maggie are in the car when it is just about taken over by walkers and he convinces her to drive on and leave the farm. Hershel is still in the front yard, when Rick comes to his rescue with Carl in tow. Hershel has a hard time leaving but Rick convinces him to get in the pickup with Carl. Andrea is left behind, the walkers are all coming at her. Daryl hears a scream and heads back to the house, he saves Lori.  Meanwhile, Maggie is in the car with Glenn and she is asking him who made it and who didn’t, but he doesn’t know.

Rick, Carl and Hershel are in the truck on the way out of the farm. All seems lost now! The farm is empty of life! Nothing but walkers left now. The three are on the highway, where they first broke down. Lori is with T-Dog and Patricia, she wants to turn around because she knows Rick is at the highway. T-Dog doesn’t want to do it, she threatens to jump out of the truck so he turns around and heads back.

T-Dog, Lori and Beth arrive at the highway, Daryl and Lori, Maggie and Glenn as well. They realize that the walkers took Patricia, Jimmy and maybe Andrea, but they are not too sure about her.

In the woods, Andrea is still alive and being hunted by walkers, it’s daylight now and she looks exhausted.  She stops to reload her gun and check for ammunition just as a walker tries to get her. She is running and running, she needs to get to the highway. Meanwhile, Rick runs out of gas and the group has to stop. Rick, acting as the fearless leader, tells everyone that they need to stay there the night, the most important thing is that they are together. Glenn reminds him that their are walkers all around. Rick confesses to everyone that the virus that turns them into walkers, they all carry it. Rick goes on to say that he thought it best if everyone didn’t know before now. Lori looks like she is going to faint, she is probably realizing that her unborn baby is infected as well.

Rick walks off away from the group and Lori joins him and gives him a hug, he confesses that he killed Shane. He goes on to tell her that he came at him, he planned it to get him alone in the woods and he had no choice. Lori is shocked and her arms come off from around Rick who tells her that he had no choice, he had to kill Shane. He goes on to say that he just wanted it over, he wanted Shane dead, so he killed him and he turned into a walker, that is when he knew Dr. Jenna was right, then Carl put him down. Lori bends over with grief, Rick tries to console her but she won’t have anything to do with it, she walks back to the group.

Andrea is still in the forest killing off walkers, but now she is doing it with a knife. All of a sudden, a hooded stranger comes to her rescue who has to walkers with no arms and chains around their necks attached to them. The hooded stranger kills the walker that is on top of her and almost bites her.

No food, no fuel and no ammo – Maggie wants to leave but Rick is still in charge and convinced that he can keep the group alive, he screams that he killed his best friend to keep them alive. He goes on to tell them what happened with Shane, he had no choice but to kill him. Carl, upon hearing this, starts crying and Lori hugs him. Rick tells them that his hands are clean. He dares anyone who wants to leave to go, send him a postcard he says. No takers of course, he says that their staying is no longer a democracy.  In the distance, we get an aerial view and we see what looks like a prison in the distance. That’s it for season 2, what did you think of the finale?