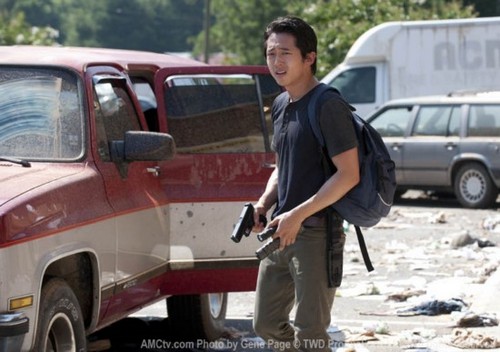 Tonight on AMC is an all new episode of THE WALKING DEAD called “Hounded.” On tonight’s show Andrea grows closer to the Governor, Michonne makes a decision about Woodbury. Did you watch last week’s season 3 episode 5? We did and we recapped it here for you!

On last week’s show three graves were dug which led us to believe that Carol was in fact the third person that they will be burying, after all, it’s not like the group was going to dig a grave for Andrew the prisoner after he tried to kill Rick.  Rick was struggling to come to terms with Lori’s death while Glenn tried to help him get his spirit back and the rest of the group took care of the baby. Everyone was mourning the loss of their friends but three graves had to be dug and supplies found for the baby.

On tonight’s show Rick is on the phone and he tells the caller that “we are dying here”. Meanwhile, Andrea jumps the wall of Woodbury, can you blame her after she was in the audience for the sick and twisted fight night? Perhaps Andrea should have left when she had the chance, ya think? A concerned citizen warns Andrea, “We’re not supposed to go over the wall!” and her escape doesn’t last that long because in the preview, the Governor tells Andrea, “You don’t have to be ashamed about liking the fight – I love it.”  I cannot wait to see tonight’s episode.

Tonight’s episode: Merle is out searching for his brother with a group and finds a body all chopped up, one of the group realizes that there is a message in the way the body parts are placed saying “go back”. All of a sudden, Merle hears someone and calls out for Michonne, he is sure it is here and out of nowhere she shows up, decapitates one guy and kills the others. Merle is after her, he screams out “we having fun yet”.

Rick is on the phone with someone, it’s a woman and she can’t believe she is on the phone with him. She tells him that they are in a safe place, because they are careful. Rick is interested; he tells her that he has a son and a new born baby, with a good group of people. He asks if they will take in others and she tells him that she will talk to the group then call him back in two hours. Rick makes one last plea before she hangs up, he tells her that she doesn’t understand, they are dying.

Rick returns to the group and tells them he cleared out the boiler block and just came to check on Carl. Daryl lets him know that they cleared out the generator room, then Rick turns and heads back out.

Merle has only one man alive, Neil, who is having a hard time dealing with the deaths of their group. Merle reminds him that they never let their own turn, they stab their dead in the eyes.

At Woodbury, Andrea wants to ask the Governor something and he just straight tells her no. She goes on to tell him that the fighting match disturbed her, she also wants to contribute and work the wall.

Rick gets another phone call, this time it’s a guy and Rick tells him that he wants his group to go with them, they want to go somewhere safe. The guy on the phone wants to know if Rick killed anyone and he admits to killing four. Then Rick is asked how he lost his wife and when Rick says he doesn’t want to talk about it, the guy hangs up the phone.

Andrea is training to work at the wall, she and another girl share stories about who they had to kill, all of a sudden there is a walker, the girl tries to kill him with a bow and fails, Andrea jumps the wall and does it with a knife which infuriates the girl and she tells Andrea “this is not a game”.

Rick is still waiting by the phone when Hershel drops by for a visit on his crutches. Rick reveals to Hershel about the phone call he got about these people who are in a safe place and he wants them to take his group in. Hershel wants to sit with Rick and wait for the phone to ring again but Rick tells him no.

Michonne catches up with Merle and Neil, they get into a fight and walkers soon show up which gives them more than what they bargained for. Meanwhile, Daryl and Carl are searching through one of the cell blocks and Daryl shares a story of how he lost his mother. Carl shares that he ended his mom, she hadn’t turned and he took care of it, they both offer their condolences to each other.

At Woodbury, the Governor calls Andrea in and tells her that she knew she wasn’t supposed to go over the wall and they don’t need her on it any longer. Andrea then tells him that she liked the fights, she just didn’t like that she liked it.

Merle wants to leave, but Neil doesn’t want to because they left Michonne alive. Merle tells him that she is going to die, they left her in bad condition and it’s not worth their lives to go after her. Merle wants him to lie to the Governor, just to tell him that they killed her and he doesn’t want to – so Merle does what he thinks he has to, he shoots him in the head.

Michonne is hurt and she has a whole group of walkers coming towards her, but guess what, they pass by and ignore her.

Rick gets another phone call, it’s the woman again and she tries to encourage him to talk about his wife’s death, she also knows his name and he didn’t tell her – she hangs up.

Maggie and Glenn make a run to get supplies and Michonne is in the same area and sees them. Glenn goes to cut the chains on the doors to a building, but wait, he has to turn around a lay a smooch on Maggie first – dumb.

Andrea is outside in the garden with the Governor and he tells her he feels good with a drink in her hand and being outside with her. He goes on to tell her that she doesn’t have to feel ashamed at liking the fight, he loves it and there is not much else to do these days. He fills her glass with more whiskey, then gets close and plants a kiss on her and both are willing participants.

Maggie and Glenn have hit the jackpot, they load up their supplies in the truck just as Merle comes at them, he wants to know if his brother is alive. Merle wants them to take him to his brother and there will be no hard feelings. Glenn says no, he will tell the group where he is and have them come out to him. Merle takes a shot at them, then manages to grab Maggie and put a gun to her head. Glenn tells him they are not taking him to their camp, Merle doesn’t care because he is taking them somewhere else. Michonne sees the whole thing and does nothing to stop Merle, but her hate for Merle and the Governor only increases.

Daryl kills a walker and finds Carol’s knife in his throat, Rick’s phone is ringing again – he picks it up. Rick asks the person on the phone how she knows his name, she tells him that she knows them and they know him. The person on the phone pretends to be Lori and Rick buys into it, he tells her that he was going to keep her alive – he loves her and should have said it. She tells him that he has the baby and Carl, she loves him and……he hangs up the phone.

Andrea and the Governor are in bed when someone bangs on the door, it’s Merle. He explains that he lost all the guys and blames Michonne for the whole thing. The Governor tells Merle to think of a good story. Merle then tells him that he has two people that know Andrea.

Carl, Hershel, Beth and the baby are together when Rick walks in and takes the baby from Hershel. Meanwhile, Daryl keeps stabbing Carol’s knife into the floor, he is frustrated – all of a sudden he moves a walker away from a door that is moving and discovers Carol behind the door. Rick takes the baby outside with the group, he tells Carl that she looks like him. Rick goes on to walk down the path of the prison and sees Michonne behind the fence with the walkers, he is shocked and so am I, the walkers don’t care that Michonne is there, what the heck is going on?